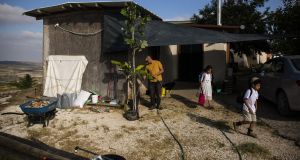 Adam Dassa waters his garden while his children Ruth and Sinai leave their house for school in the Jewish settlement of Har Hemed near Nablus. Photograph: Amir Levy/Getty

Wednesday marks the date set by Israeli prime minister Binyamin Netanyahu for the start of the process to annex parts of the West Bank but it is still unclear exactly which areas he has in mind for the historic move as serious differences have emerged within Israel’s new coalition government.

“Anything that isn’t connected to the fight against the coronavirus will wait for after the virus,” Gantz said.

Mr Netanyahu indicated a delay in annexation was likely as discussions continued with American officials, but he made clear that he would press ahead even without the support of all his coalition partners.

“We are holding a dialogue with the American team that is here in Israel. We are doing that discreetly. The issue isn’t up to Blue and White. They aren’t the decisive factor in one direction or the other.”

The US Middle East peace plan, dubbed the deal of the century, was unveiled in January. It included the broad outlines of a map that would allow Israel to annex about 30 per cent of the entire territory it captured from Jordan in the 1967 Six-Day War, in return for negotiations with the Palestinians leading to the creation of an independent Palestinian state in the rest of the territory.

The plan was condemned by the Palestinian leadership along with the Arab world and the overwhelming majority of the international community.

United Nations high commissioner for human rights Michelle Bachelet called on Israel not to annex any of the West Bank. “Annexation is illegal. Period,” she said. “Any annexation. Whether it is 30 per cent of the West Bank or 5 per cent.”

She warned of “disastrous” consequences that were liable to last for decades and would affect the entire region.

On the ground, Jewish settlers have been eagerly anticipating the move, which many see as a fulfilment of a biblical promise whereby God granted the land to the Jewish people.

At the same time, the leaders of the Yesha settlers’ council have urged the Israeli government to insist on a number of conditions.

Speaking during a tour of West Bank Jewish communities organised by the Binyamin regional council, mayor Yisrael Gantz said Mr Netanyahu must insist there is no Palestinian state; that all roads to settlements remain under Israeli military control; and that no restrictions are imposed on settlement construction.

“There are still no agreements and we haven’t received answers. The Trump plan presents more dangers than opportunities,” he said.

According to unconfirmed reports, the initial annexation plan will be limited to a number of settlement blocs and may exclude the Binyamin area north of Jerusalem, but Mr Gantz said any extension of Israeli sovereignty must be embraced.

“Every bit of sovereignty here, we will be thankful, we will thank the prime minister and President Trump. I will work hard to expand sovereignty to all of Judaea and Samaria,” he said, using the biblical name for the West Bank.

Aharon Katzof, a father of six, lives in the illegal outpost of Esh Kadosh, between the Palestinian cities of Nablus and Ramallah.

“It’s a very exciting day. It’s like we’ve been living here since 1967 and finally we are putting our mailbox outside.”

At the same time, he expressed concern that his home may be situated a mere 100m from a future Palestinian state.

“I’m super worried about this, but if we stick to the Trump plan and all the conditions imposed on the Palestinians, such as stopping educating and financing terror, this is never going to happen so there will never be a Palestinian state,” he said. “People talk about the cup half full or half empty. We take the cup and we drink it. We move forward, we build, we have children, we plant and we grow.”

Veronica Gorelic, a mother of four from the settlement of Ofra, thought this day would never come.

“We have to take this opportunity. It’s a way to tell the world what we believe, the truth – this is Israel.”