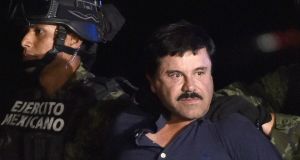 A light rain pattered on the rooftops of Los Mochis in Friday’s pre-dawn darkness, the town silent and still as the Sea of Cortez lapped its shore.

Hardly anyone saw or heard the small force of police and marines close in on Rio Quelite, a narrow, residential street in the affluent neighbourhood of Las Palmas.

Hardly anyone, that is, save their quarry: Joaquin “El Chapo” Guzman and his lieutenants, hunkered down in a white house just off the corner of Jiquilpan Boulevard, sensed a trap was about to spring shut. According to authorities the Sinaloa cartel men opened fire first, a blaze of gunfire shattering the silent night.

And so began Guzman’s wild, bloody, surreal attempt to evade capture, a six-hour chase involving helicopters, sewers, a carjacking and a sex motel which would convulse Los Mochis and uncork, when it was all over, jubilation in Mexico City and Washington.

The image of Guzman which ricocheted around the world - a shackled, dazed figure in a filthy T-shirt - may have suggested a spent force and a fall foretold. But with a little bit of luck during this assault, Mexico’s most wanted man might once again have escaped into the wooded sierras of Sinaloa and continued to run a vast, underworld empire.

Had he done so, the world would be asking anew about Mexican state corruption and ineptitude. Instead, it is asking whether the fugitive’s desire to mould his image through an interview with the actor Sean Penn and a would-be biopic was self-destructive hubris.

An impoverished orange-seller who rose to infamy and fortune, a Houdini who has made not one but two spectacular jail breaks, most recently last July, Guzman certainly had a compelling story to tell.

Doing so may have helped betrayed his location. “He contacted actresses and producers, which was part of one line of investigation,” said Mexico’s attorney general, Arely Gomez. She did not mention names, but Penn, along with fellow actor Kate del Castillo, who acted as the American’s translator, are the only film people known to have met Guzman in recent months.

If confirmed it will be a rich irony: summoning Hollywood to tell his story, only to trigger an ending he did not want - Argo in reverse.

The denouement began on Friday at 4.30am when, according to authorities, El Chapo and his crew started shooting, prompting the marines, part of an elite, narco-tracking squad, to return fire. They sealed off the street and summoned helicopters which whumped overhead, jolting Los Mochis into the realisation that a siege was under way.

“It didn’t sound like that many soldiers or helicopters so we didn’t think they were after an especially big fish,” said Francisco Pereira, a taxi driver who lived about a mile away. “But of course for the big fish they need to keep it secret,” he added, tapping his nose - a reference to the drug cartels’ infiltration of security forces.

The marines were after “Moby Dick”, the head of a criminal enterprise which had alternately terrorised and co-opted the Mexican state while smuggling huge quantities of cocaine, heroin, marijuana and other drugs to Chicago, New York and other US cities.

Five cartel gunmen died in the battle, according to authorities, fresh statistics to add to the more than 100,000 Mexicans who have died in a decade of so-called drug wars.

A mortuary official said the gunmen were not from Los Mochis but from other parts of Sinaloa, a territory which rises from the Pacific coastline to remote mountain ranges.

While his men exchanged thunderous fire, wounding one marine, Guzman and his chief of security, Orso Ivan Gastelum Cruz, made their escape.

Unlike Pablo Escobar, gunned down as he scrambled over the rooftops of Medellin, Colombia, in 1993, Guzman and his associate took another option - a sewer. It was as if the earth swallowed them because for the next few hours they remained hidden, below concrete and palm trees.

The hunters were prepared for his subterranean tactic and followed him into the sewer with torches, according to Mexican media reports. And still, for hours, nothing.

Even the man nicknamed “Shorty” would have had to crouch as he felt and squelched through the foetid tunnels, the Guardian can testify, having joined Mexican reporters who later explored the escape route.

While tropical sunshine began to heat the streets above, the dark, dank sludge below transformed Guzman, whom Forbes magazine once listed as a billionaire, and Cruz, who reportedly dated a beauty queen, into filthy scarecrows.

Some time after 10am they are believed to have emerged from their labryinth on the corner of Adolfo Lopez Mateos Boulevard, near Fatima hospital. They carjacked a motorist stopped at a traffic light and made off in a red Ford Focus.

The Sinaloa cartel redoubt lay south in the mountains of Culiacan, where locals shelter Guzman as a sort of Robin Hood, but for whatever reason he and Cruz sped north. Out on highway 15 the landscape turns semi-rural, maize fields on one side, the Barobampo mountain peaks the other.

If El Chapo felt any exhilaration that he had done it again, outfoxed them all and slipped the net, reality quickly robbed him of that fantasy: black-uniformed federal police intercepted the outlaws.

And promptly took them to a sex motel. The police wanted a discreet refuge to await reinforcements so the world’s most notorious drug lord found himself handcuffed by a beige satin bedspread in room 51 of the Doux motel.

Decorated in pink and purple hues, it costs 300 pesos (€15.40) for six hours. A laminated menu of sex toys, condoms and lubricants sits by the bedside, not visible in the photograph of the captured El Capo.

By the time marines thundered into the motel grounds and collected their prize, the news was electrifying officials in Mexico City.

When he returned he read them the president’s tweet: “Mission accomplished. We have him.” The diplomats erupted into cheers and applause and sang Mexico’s national anthem.

The US Department of Justice and the Drug Enforcement Administration (DEA), which helped behind the scenes, hailed the capture and moved to seek Guzman’s extradition for drug, murder and money-laundering charges.

Mexico’s attorney general said the government has started processing the request - a request which could leave Guzman languishing in a US jail until he dies.

For now he is back in Altiplano, the maximum security jail from which he escaped in July. It has been remodelled, and there are tanks, to make sure he stays put.

Los Mochis is still digesting its role in the drama.

“The government did well. Hopefully this will calm the violence,” said Gloria Villa (50), part of a crowd of bystanders gathered near El Chapo’s former lair. “I wanted him to see this,” said Villa, indicating her young son. “We’re all part of the republic.”

The Doux motel, for its part, now boasts a room with special frisson. Asked if clients were expressing particular interest in room 51 a receptionist nodded. “Oh yeah.”