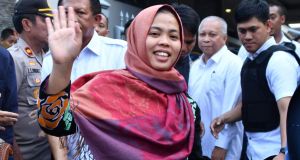 The Indonesian woman accused of killing Kim Jong-nam – the estranged half brother of North Korean leader Kim Jong-un – was unexpectedly freed from custody on Monday after Malaysian prosecutors dropped the murder charge against her following a formal request from Jakarta.

Siti Aisyah (26) was discharged without an acquittal after the prosecution applied to withdraw the murder charge, which could have led to the death penalty.

The prosecution’s surprise move came after Tommy Thomas, the Malaysian attorney general, acquiesced to a letter from Yasonna Laoly, Indonesia’s minister of law and human rights, in which he asked Malaysia to “reconsider the charges” against Ms Siti and allow her to return to Indonesia “taking into account the good relations between our countries”.

Ms Siti – who had spent two years in custody – was one of two women accused of killing Kim Jong-nam at Kuala Lumpur airport in February 2017 by smearing VX nerve agent on his face and eyes. The women have said they believed they were performing a stunt for a reality television show.

The surprise release is a strong and well-timed win for Indonesian president Joko Widodo, known as Jokowi, who will fight for re-election in the presidential vote scheduled for April 17th.

In his letter to Mr Thomas, Mr Yasonna reiterated that Ms Siti was led to believe she was participating in a prank and that she was not aware “she was being used as an intelligence tool of North Korea”.

Mr Thomas on Friday last week replied to the Indonesian minister saying the prosecution was going to drop charges taking into consideration bilateral relations between Jakarta and Kuala Lumpur.

“We still truly believe she is merely a scapegoat and she’s innocent . . . There was no direct evidence that she applied anything on Kim Jong-nam,” Gooi Soon Seng, Ms Siti’s lawyer, told reporters on Monday.

Wearing a red scarf, Ms Siti was seen leaving the court in Kuala Lumpur smiling. She then appeared at a press conference at the Indonesian embassy alongside government officials including the Indonesian ambassador and Mr Yasonna.

Doan Thi Huong of Vietnam, Ms Siti’s alleged accomplice, was due to give testimony in her own trial on Monday, after months of delay, but her case was adjourned until Thursday following Ms Siti’s sudden release.

Ms Doan’s legal team said they had written to Mr Thomas asking him to review Ms Doan’s case and discharge her also. Mr Thomas’s decision is expected on Thursday. If he rejects the application, Ms Doan’s case will proceed as planned on the same day.

“We were caught by surprise,” said Salim Bashir, one of Ms Doan’s lawyers, on Monday. He added that the legal team had approached representatives of the Vietnamese government to ask if it could intervene on behalf of Ms Doan as Indonesia had done for Ms Siti, but added that he did not know “the extent of its [Vietnam’s] involvement with the Malaysian government”.

In a preliminary hearing in August last year, Judge Azmi Ariffin pushed back on the women’s defence that they were unknowing participants in Kim Jong-nam’s death, saying he could not rule out the killing was a “political assassination”. – Copyright The Financial Times Limited 2019