A TransAsia Airways plane crash lands on a Taipei river, killing at least nine people and injuring more than 10 others. Video: Reuters 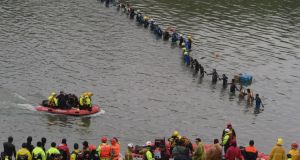 Rescuers and divers search for missing passengers at the crash site of the Transasia turboprop plane in the Keelung river in New Taipei City in Taiwan. Photograph: Sam Yehsam Yeh/AFP/Getty Images

The crew of a twin-propeller TransAsia aircraft faced a problem with one engine but restarted the other, investigators said today as it emerged the aircraft had suffered a lack of thrust before crashing into a river in Taipei, killing 35 people.

The reason for the pilots’ action was unclear but a combined lack of thrust caused the almost-new turboprop ATR 72-600 to stall soon after take-off, aviation safety council officials told a news briefing after a preliminary examination of the black box flight-data and voice recorders.

The aircraft, which can fly on one engine, was carrying 58 passengers and crew when it lurched nose-up between buildings, clipped an overpass and a taxi with one of its wings and then crashed upside down into a shallow river on Wednesday. Fifteen people survived.

The black boxes showed the aircraft warned five times of stalling before the crash in the centre of Taipei, according to findings by the council.

The right engine entered a state called “auto-feather”, in which it reduced thrust to the propeller, said Thomas Wang, managing director of the council.

The flight crew then reduced acceleration to the left engine, turned it off and then attempted to restart it, but it did not gain enough thrust.

There was no word on what may have been going through the pilots’ minds or what the instruments may have been telling them, but evidence presented so far will raise questions over whether they accidentally cut the wrong engine.

“The first engine experienced a problem 37 seconds after take-off at 1,200 feet,” Wang said.

He said the pilot had announced a “flameout”, which can occur when fuel supply to an engine is interrupted or when there is faulty combustion, but there had not been one according to the data.

“The flight crew stepped on the accelerator of [right-had side] engine two. The engine was still operating, but neither engine produced power.”

He said the aircraft could fly with one engine. The aircraft was powered by two Pratt & Whitney PW127M engines.

A fuller report on the crash will be available in next 30 days, with a final report expected in the next three to six months.

The pilot, Liao Chien-tsung (42), has been praised by Taipei’s mayor for steering the aircraft between apartment blocks and commercial buildings before ditching the stalled aircraft in a river.

The bodies of Liao and his co-pilot were retrieved from the cockpit, with their legs badly broken, investigators said.

“They were still trying to save this aircraft until the last minute,” media quoted unidentified prosecutors involved in the crash investigation as saying.

The aircraft took off from Taipei’s downtown Songshan airport and was bound for the Taiwan island of Kinmen. Among those on board were 31 tourists from China. – (Reuters)