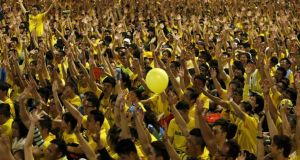 “The only way for the people to get back to the old system is for them to remove this prime minister,” said Mahathir, a deeply-respected 90-year-old who was once Najib’s patron and is now his fiercest critic.

“And to remove him, the people must show people’s power. The people as a whole do not want this kind of corrupt leader,” he told media before heading to the rally, whose numbers police estimated at about 25,000 on Sunday afternoon.

The protest has brought into the streets a political crisis triggered by reports of a mysterious transfer worth more than $600 million into an account under Najib’s name.

Najib, who denies any wrongdoing, has weathered the storm and analysts say the protest is unlikely to inspire broad public support for him to quit because it lacks a strong leader.

These protests, unlike a rally in 2012, also lack the support of a party identified with the Malay majority: most protesters were from the minority ethnic Chinese and Indian communities.

However, Mahathir - the country’s longest-serving leader - was a leader of the ruling United Malays National Organisation (UMNO), which represents Malays.

UMNO vice-president Hishammuddin Hussein said that by turning up unexpectedly at the anti-government rally on Saturday, Mahathir had “crossed over the line”.

Another UMNO leader said that a million government supporters would stage a “red shirts” rally on October 10th that would trump the protests of the past two days.

“This shows the solidarity of Malaysians, that Najib still has the majority support,” Jamal Yunos told reporters.

Mahathir’s siding with protesters sits oddly with the often-authoritarian style of his own 22-year rule until 2003, during which Malaysia became a powerhouse of economic development, but also won a reputation for cronyism and dubious “mega-projects”.

Najib was once a protege of Mahathir, just as the now-jailed Anwar Ibrahim - once widely viewed as Mahathir’s heir apparent - was before him.

Anwar fell from favour when he began a popular “reformasi” (reform) movement against the nepotism he said marked Malaysia’s business and political worlds.

Mahathir sacked him from his posts, and charges of sodomy and corruption followed.

Mahathir has always maintained that the sodomy charges were genuine and made Anwar unfit to be leader.

On Sunday, security remained tight and anti-riot trucks stood ready, but there were no reports of violence.

City authorities rejected an application by pro-democracy group Bersih for a protest permit, which had raised fears of a repeat of the 2012 rally, when police used water cannon and tear gas to disperse protesters.

“They must face the consequences if they dare to break the law,” he said.

The national news agency Bernama said 12 people in the southwestern city of Malacca were arrested for wearing the signature yellow T-shirts of the protests, which the government had banned before the rally.

Malaysia has been gripped since July by reports that investigators probing allegations of mismanagement and corruption at the debt-laden state fund 1Malaysia Development Berhad had discovered the transfer into Najib’s account.

Its anti-corruption agency has said the funds were a donation from an unidentified Middle East donor.

Najib, who says he did not take any money for personal gain, has sacked his deputy and ministers who had questioned him as he sought to contain the scandal.

The attorney-general who had been investigating 1MDB was also replaced.

Authorities also suspended two newspapers and blocked access to a website that had reported extensively on 1MDB.

The coalition, in power since 1957, lost the popular vote for the first time in 2013 to an opposition alliance that split earlier this year.

However, Najib is under pressure over his handling of the economy, which has been hit by a slump in energy prices that threaten oil and gas revenues.

Malaysia’s currency plummeted this month to 17-year lows against the dollar.