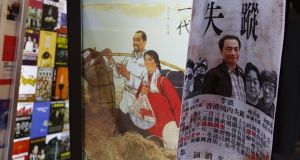 Any abduction of people from Hong Kong to face charges elsewhere would be an “egregious breach” of Beijing’s promises to rule the former British colony, Britain’s foreign secretary said yesterday, amid suspicion that several booksellers critical of China’s leaders have been taken by mainland agents.

Lee Bo (65), a shareholder of Causeway Bay Books and a British passport holder, went missing from Hong Kong last week, though his wife has withdrawn a missing persons report saying he travelled to China voluntarily.

Four other associates of the publisher that specialises in selling gossipy political books on China’s Communist Party leaders have been unaccounted for since late last year.

The disappearances, and China’s silence, have stoked fears of mainland Chinese authorities using shadowy tactics that erode the “one-country, two-systems” formula under which Hong Kong has been governed since its 1997 return to China.

Britain’s foreign secretary, Philip Hammond, told reporters at the end of a two-day visit to Beijing there had been “no progress” on determining the booksellers’ whereabouts after raising the case with Chinese and Hong Kong officials.

“It would not be acceptable for someone to be spirited out of Hong Kong in order to face charges in a different jurisdiction,” Mr Hammond said.

Such an action would be an “egregious breach” of the one-country, two-systems policy, Hong Kong’s Basic Law, or mini-constitution, and the 1984 Sino-British Joint Declaration, which provided for the handover of power.

“It’s an essential part of the settlement in Hong Kong that it has its own judicial system and it is solely responsible for trying offences that occur in Hong Kong,” Mr Hammond said.

There was only speculation about the disappearances and there was a need to “know what has happened and who is responsible for it”, he said.

Hong Kong security secretary Lai Tung-kwok said that the territory was still awaiting a response from Chinese authorities on the fate of the men, and that it would ask again “if necessary”.

On Tuesday, China’s foreign minister Wang Yi said Lee was “first and foremost a Chinese citizen” when asked if China recognised his British passport. He warned against “groundless speculation” but declined to give further details.