Drug may not be used in public, distributed or sold, or used by minors 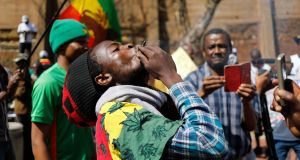 A Rastafarian and supporter of the legislation of marijuana light a joint in Johannesburg, as they celebrate after the Constitutional Court ruled that the personal use and growing of marijuana in South Africa is legal. Photograph: Kim Ludbrook/EPA

South Africa’s highest court has ruled that it is no longer illegal for adults to cultivate or use marijuana in private.

The landmark ruling handed down by the constitutional court on Tuesday makes South Africa the third African country to decriminalise the use of a plant that is widely grown across the continent despite its predominately illegal status.

In September 2017 Lesotho became the first nation in Africa to legalise the use of marijuana for medical and research purposes, and in April this year Zimbabwe followed suit.

Deputy chief justice Raymond Zondo’s ruling on Tuesday upheld a decision to legalise the use of marijuana at home that was made by the Western Cape Province high court last year, but subsequently appealed by state prosecutors.

The government had argued against the legalisation of marijuana – or “dagga”, as it is called locally – saying the drug was harmful to people’s health and not in line with South African values.

However, the court unanimously found that the country’s cannabis ban infringed on section 14 of the constitution, which gives all citizens the right to privacy.

“It will not be a criminal offence for an adult person to use or be in possession of cannabis in a private space,” Mr Zondo said, before warning the drug may not be consumed in public, distributed or sold, or used by minors.

The judgment does not specify how many grams of cannabis a person can use or have in private. Instead, the court tasked parliament with deciding on the amount people could possess, and gave the lower house 24 months to change the law to reflect its ruling.

The Cannabis Development Council of South Africa welcomed the ruling and called on government to drop charges against people currently accused by police of being in possession of the drug.

Some pro-marijuana activists, however, were not satisfied with the extent of the ruling and also called for the drug to be decriminalised for use in public.

The UN has estimated that more than 10,000 tonnes of marijuana are produced in Africa each year, and those who advocate for its use believe the crop could be worth billions of euro in the global market for legal cannabis.

Despite its previously illegal status, marijuana has to date been widely grown on a commercial scale in many South African provinces, particularly in the Eastern Cape and KwaZulu-Natal.

The UN believes that South Africa produces about 2,500 tonnes of marijuana each year for local consumption and export.