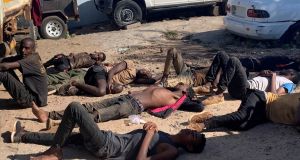 Some of the 14 immigrants who survived after they were found in a container on a truck in Tete province, in the western part of Mozambique. Photograph: EPA/STR

After 64 Ethiopians were found dead in the back of a cargo truck in northern Mozambique on Tuesday, international focus has shifted on to intra-Africa trafficking routes, with experts saying the number of people risking their lives to reach South Africa has increased over the past decade.

David Matsinhe, a Johannesburg-based researcher for Amnesty International, said human trafficking has grown alongside an increase in the amount of drug trafficking. “Governments need to work together to ensure that the human traffickers responsible for those deaths be brought to justice,” he said, while asking for the 14 survivors to be properly protected.

“Victims of human trafficking should be treated as victims rather than criminals, because that’s what these governments tend to do.”

On its Facebook page, the Ethiopian embassy in South Africa said it had been able to identify the deceased with the help of the survivors, despite no one inside the truck having a valid travel document.

“Mozambique’s northwest Tete province is a popular transit point for victims of human traffickers who aspire to travel to South Africa,” said the embassy, adding that survivors are getting assistance and will return to Ethiopia.

“I learned with a heavy heart of the deaths of many en route to Mozambique from Malawi, ” wrote Ethiopian prime minister and Nobel laureate Abiy Ahmed on Twitter. Ethiopia’s president, Sahle-Work Zewde, said she was “deeply saddened” to hear the news.

Photos being shared widely on social media appear to show the men inside the truck: thin, bare-chested and crammed in.

“You can imagine the kind of trauma and psychological damage they were put through,” Matsinhe said. “We need these governments to protect these individuals. Even if it’s one person who died, that’s one too many. We’re speaking about 64 people, 14 who survived, that’s a lot of people and tells you the scale of human trafficking taking place in that area. Human trafficking is not only in the direction of Europe.”

The Amnesty International researcher also said the deaths highlighted the level of corruption inside Mozambique, which enables traffickers to do their work. “There must be policies put in place to hold accountable those people facilitating human trafficking within government institutions: border officials, police officers, security guards at the border gates.”

In 2016, Foreign Policy magazine published an investigation into a 2,500-mile migration route between Ethiopia and South Africa, calling it “one of the most well-travelled”. It detailed how migrants paid $4,000 to smugglers, risking robbery, arrest and death.

As many as 20,000 people take this route illegally each year, it said, with smugglers promising potential travellers they could complete the full trip in just 15 days. The same year, the bodies of 19 Ethiopians were found in the back of a truck in the Democratic Republic of the Congo.