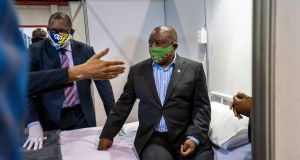 South Africa’s government will begin to lift coronavirus lockdown restrictions next week due to concerns about their impact on jobs and the economy.

From May 1st, some businesses can reopen in a phased way, but most workers must continue to stay at home and public gatherings remain banned. Movement between provinces and international travel also remains severely restricted.

The mining sector is set to reopen, while shops and supermarkets can sell a wider variety of goods, including cigarettes, but alcohol remains banned. In addition, some schools will reopen, but class sizes will be dramatically reduced.

Since March 27th, South Africa has been subjected to some of the most severe lockdown restrictions in the world as part of the government’s efforts to stem the spread of Covid-19.

Most people have been allowed to leave their homes only for essential purposes such as buying food and medicine. Jogging and dog-walking are not allowed.

However, the Covid-19 crisis and the government’s response to it have taken a significant toll on South Africa’s beleaguered economy, with the South African Reserve Bank projecting it could contract by as much as 6.1 per cent in 2020.

Business for South Africa, an alliance of business bodies, has also said that more than one million jobs could be lost if a hard lockdown continues. Before the Covid-19 pandemic hit in early March, the country’s official unemployment rate was already at 29.1 per cent.

On Thursday evening, after a week consulting with public and private sector stakeholders, President Cyril Ramaphosa outlined his government’s plans for the lockdown’s future.

In a live television address to the nation, he said the month-long lockdown had worked well so far, but he acknowledged that “our people need to eat. They need to earn a living.”

As a result, he said a strategy had been developed to slowly revive economic activity, whereby the country, provinces, districts and metros will be classified on a five-level risk scale that determines what restrictions will be in place at any given time.

South Africa will move from level five, the highest risk category, to level four on May 1st.

“This approach is guided by the advice from scientists who have advised that an abrupt and uncontrolled lifting of restrictions could cause a massive resurgence in infections,” said Mr Ramaphosa, who added that such an eventuality would lead to a second hard lockdown.

Hours before Mr Ramaphosa’s address, the government confirmed that, as of April 23rd, the number of cases and deaths attributable to Covid-19 stood at 3,953 and 75 respectively. This was a rise of 318 cases over 24 hours, the largest daily increase recorded in the country so far.

On Tuesday Mr Rampahosa also unveiled an unprecedented €24 billion support package, the largest in his country’s history, to tackle the economic fallout from Covid-19.