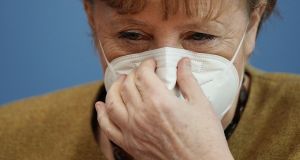 Germany is mulling a total air travel ban to drive down the spread of Covid-19 after chancellor Angela Merkel’s admitted her administration had “let it get out of control”.

Nearly a year after its first cases of Covid-19, praise from all quarters over Germany’s handling of the first wave is a distant memory as the country struggles to contain the spread of the virus and organise vaccinations.

On Tuesday, some 3,300 staff in two Bavarian hospitals were placed under quarantine after 99 staff tested positive, with 11 suspected of carrying the British mutation. Two Berlin hospitals are also in lockdown after 26 staff members and patients out of 64 positive cases were confirmed with the B 1.1.7 virus variant.

The slow but steady spread of the virus mutations across Germany meant the country was “sitting on a powder keg”, warned Dr Merkel during an internal CDU conference call.

Despite this slide in new infections, the German leader is demanding an even tighter lockdown “or else, in 14 days, we will be back where we started”.

Dr Merkel was unusually blunt in her criticism of German wanderlust – and demanded a “tougher border regime”.

“What is it with the Germans and travel? I’ve asked a hundred times in discussions: why can’t we ban travel?” she asked, noting that 50,000 Germans flew daily to the Canary Islands and Maldives over Christmas. “We need to thin out air travel so that one cannot get anywhere.”

German interior minister Horst Seehofer told the Bild tabloid on Tuesday evening his staff were already at work to do just that, limiting the danger posed by various virus mutations.

“This includes considerable tougher border controls, particularly on frontiers to high-risk areas, but also a reduction of flight traffic to Germany effectively to zero,” he said. “This is what Israel is doing to reduce the importation of virus mutations.”

Germany’s travel lobby group (DRV) has protested against proposed tighter regulations as a death knell for an industry already on its knees.

“The government should not try to restrict further the already restricted travel restrictions,” said the DRV in a statement. It said travel “is a basic freedom, not a politically-granted privilege” and accused the federal government of distracting from its vaccine failures.

A month after Germany began its vaccine rollout, it remains far behind the UK and EU neighbours.

German federal health minister Jens Spahn has suggested the country should be vaccinating 300,000 people a day – the current UK number – while official figures say the real number is just one-fifth of that.

That puts Germany behind Ireland, France, Romania and Portugal in the EU league table.

Germany’s division of competence means the Merkel administration is responsible for vaccine acquisition while the 16 federal states – and thousands of local health authorities – are responsible for administering the vaccine. State leaders have expressed frustration repeatedly that vaccine deliveries have repeatedly fallen short of their capacities at vaccination stations.

But federal capitals have come under fire for complicated procedures, and large-scale technical failure, with elderly Germans complaining the vaccine roll-out is proceeding at various speeds across the country.

The western state of North Rhine-Westphalia asked pensioners to register online for an appointment. But, minutes after the website launch on Monday, it collapsed after what local officials called an “epic” capacity surge on call centres.

Despite an additional 1,200 call centre employees and server capacity, they had underestimated the surge of queries from 1.2 million over-80s.