Former deputy leader of SDLP says deal has been damaged in some eyes, but it still has promise 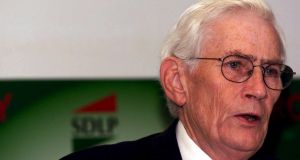 Seamus Mallon said the agreement changed the relationship between the Irish Government and the British government.

Northern Ireland’s first deputy first minister Seamus Mallon said he is convinced the Belfast Agreement led to “one of the most important periods in Irish history”.

It created peace, “and for the first time in this country that peace was accompanied by a very imaginative series of political structures”, Mr Mallon said at Dublin’s Unitarian Church on St Stephen’s Green where he was to begin a reading of names of the almost 3,600 people who died in the Northern conflict between 1966 and 2016.

Mr Mallon, a former deputy leader of the SDLP, said the agreement changed the relationship between the Irish government and the British government .

He called for “a new beginning” for the agreement and “all that it could promise”.

He acknowledged the 1998 deal “has been damaged in some eyes, but then those eyes wanted it to be damaged anyhow”.

He noted that neither Sinn Féin or the DUP supported it originally, but said things “can be changed if we give respect to each other’s traditions”.

Beforehand, beginning the recital of the names at the Unitarian Church, Mr Mallon spoke movingly of the deaths of neighbours and friends during the Troubles. A place very close to him locally is Kingsmill, where 10 Protestant workers were murdered by the Provisional IRA

He said they thought it was a loyalist murder gang because the leader asked a Catholic to step forward and they thought he was going to be killed.

“And Reggie Chapman took his hand, as they put their hands up the side of the van, squeezed it as if to say ‘we’ll not let it happen to you’. Richard Hughes, the Catholic, was pulled away and told to run. The guns opened; 10 men lay dead.”

He also remembered the policemen “who went into Jimmy and Sadie Reavey’s house on a Sunday. Their three sons were watching television, sitting around the fire. They killed the three of them. I visited the house the next morning, 38 bullet marks on the walls of the room spoke volumes.”

And he spoke of “a young man, let’s call him Jack Adams”.

He was “a very good man, good neighbour, good farmer, good father, good person,” who was “shot dead while he was working on his land, shot on his tractor.

“Why? Because after 400 years of the Adams family living there, he was seen and described in the little green book of IRA activities as part of the British war machine. How absurd can it get? But he was left dying, his blood seeping into the land.

“The question he almost answered - what land? Irish land? British land? Or simply the Adams family land? That is a question which we must all answer in such a way (that) the like of that murder will not happen again.”

And the young policemen Snowden Corty and Ronnie Irvine, who minutes before waved him and his then 12-year-old daughter through to the local village.

He heard the bang. “There was Snowden lying under a cattle truck with cattle in it and effluent seeping from it and he dying in a very violent way. The spasm of the damage to his spinal cord meant he was actually raising himself quite high off the ground as he tried to say something.

“It was muffled. The only few words I could make out were ‘I love them’, speaking of his family. The local doctor arrived and he pronounced both young Ronnie and Snowden dead.”

He and his daughter “drove home and I confess we both cried, cried at the awfulness of it”.

As a symbol of a new beginning they should embark on in Northern Ireland, he would recommend, “the clasp of that hand by Reggie Chapman with Richard Hughes on the side of that road at Kingsmills”, he said.