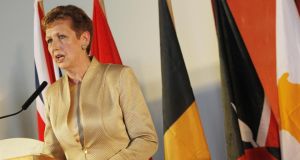 The Catholic church’s support for the corporal punishment of children has been raised with Pope Francis by former president Mary McAleese, according to a new interview.

Ms McAleese also linked the church’s attitude to gay people and its “long history of misogyny” to its historical anti-Semitism during the exhange.

In the interview with Northern Ireland journalist Martin O’Brien, Ms McAleese spoke of her admiration for Pope Francis and said that she communicated with him “occasionally”.

“For example, I have raised with him the problem of youth suicide and self-harm, since the church provides educational services to a majority of children in Ireland and some 50 million worldwide.”

She said that Pope Francis has set up a working party on corporal punishment under the Pontifical Commission for the Protection of Minors, which is chaired by child abuse survivor Peter Saunders.

On Wednesday it became illegal in the State to slap a child.

Speaking on gay rights, Ms McAleese recalled in the interview that 40 years ago at Trinity College Dublin she had joined with Senator David Norris and others to campaign for homosexual law reform.

She said that the fact her son Justin was gay gave her “an even greater insight” into the prejudices confronting gay people.

“I see my church as a major conduit for homophobia which is toxic, a form of hatred that has nothing to do with Christ and is unChristian.”

In the interview, published in the Irish Catholic newspaper, Ms McAleese said it’s not that long ago since the church “had to acknowledge that its historical teaching on Jews had been atrocious and undoubtedly a major contribution to the cultures of anti-Semitism all over the Christian world.”

She also said that the church “has never been a champion of women”, ranging from a 19th-century ban on women singing in church choirs, to the description of women as “objects of suspicion” in the 1917 Code of Canon Law, to a current Vatican rule which gives bishops the power to permit girl altar servers but allows parish priests to ban them.

She said that she favours the ordination of women priests, pointing out that “the doctrine of women’s exclusion from priesthood is not an infallible doctrine currently”.

On the historic visit of Queen Elizabeth II to Ireland in 2011, who she said wanted to contribute to the peace process “out of her deep sense of Christian conviction”, Ms McAleese said: “We both hoped that it would be a very healing time and it was. It was four days of healing.”

She said that Pope Francis was “by far the most intriguing pope of my lifetime”, and after just two-and-a-half years, “his greatest legacy to the church has been his welcoming of debate after the stultifying and suffocating imposed silence” of his two immediate predecessors.

“I think Francis is allowing the church to breathe and that is a wonderful thing. I don’t agree with him in everything but I really like the man,” she said.