Report found 94% of migrants in Brussels slept rough, and 73% did not get enough to eat every day 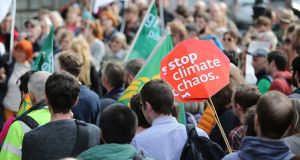 Brussels event hears Ireland must have “good story” on domestic climate policy if it is to be respected in developing states. Photograph: Crispin Rodwell

Ireland must “have a good story to tell” on climate-change policy at home if it is to be respected in developing states struggling to handle the worst impacts of the climate emergency, a Department of Foreign Affairs official has warned.

Speaking at an event hosted by the department at the annual European Development Days in Brussels, Aidan Fitzpatrick, a senior development specialist, said Irish development policy was about building capacity within the poorest states rather than simply providing aid. However, he said having good domestic policy was essential.

“We can do the best development work in our department but if it’s not backed up by good domestic policy at home it’s not ideal.”

Asked about promoting policies to tackle the climate emergency, Mr Fitzpatrick said: “Well, the Taoiseach himself has said we’ve been a laggard on climate change. Ideally, yes, if we are going about helping developing countries improving climate resilience it would be better if we had a good story to tell from home. I think the new policy will help us in that direction as well.”

He was referencing the the Government’s climate action plan, which was published on Monday.

Now in its 13th year the European Development Days has been branded the “Davos” of development policy, bringing together political, business and NGO leaders from the Northern and Southern hemispheres to discuss priorities.

As the two-day event takes place hundreds of young African men sleep rough nightly around parks and train stations in the Belgian capital.

A report last year by the UK-based Refugee Rights Europe project found 94 per cent of migrants in the city slept rough, 73 per cent did not get enough to eat every day, and most were living in “untenable” conditions.

Mr Fitzpatrick said key to stemming the flow of migrants was making Africa an attractive place to stay. The tragedy for Africa and these young men was that they were usually the “best educated” young people with the “resources” to make it to Europe. The poorest and most marginalised young Africans were left behind.

She said there were more people in Ethiopia under the age of 30 than there were people in the UK. “Those kids we kept alive are in their 20s; now they need jobs.”