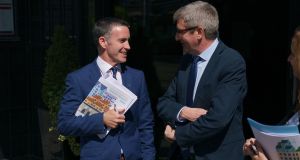 Minister of State for Housing Damien English has agreed to spend a night in a homeless shelter, having been challenged to do so by a teenager.

The 19-year-old, who asked to be identified under the pseudonym Brian Middleton, challenged Mr English at the launch of the Irish Council for Social Housing’s annual report on Wednesday.

He said he had been living on the streets and asked the Minister if he would be willing to sleep in a hostel he had previously attended.

A clearly thrown Mr English said he would do it so long as it was “a quiet thing” and not in the media spotlight.

“There is no reason for someone like you to live on the street . . . it shouldn’t happen,” he said.

A spokesman for Mr English later confirmed he was happy to make the commitment and said “this is something the Minister has done previously and he has done it quietly and in his own way”.

Speaking to The Irish Times, Mr Middleton, who describes himself as being from a middle class background in London, said he did not expect the Minister to follow through on his commitment but would be happy if he did.

“I found out that this [event] was happening and it’s just the kind of thing that one does,” he said. “Maybe they [politicians] are nice and maybe they aren’t but they have no connection to what’s going on.”

Mr Middleton explained he had had problems at home and had left, eventually arriving in Ireland in April on a circuitous route that had brought him to France, the Czech Republic and back to the UK.

Once in Dublin, he bought a small boat to live on but was later forced to seek emergency accommodation. He is now back living on his boat.

Meanwhile, the council’s report showed 3,219 homes were delivered through voluntary agencies last year. A further 5,000 units were now “in the pipeline”, it said.

“You can never be satisfied when you have people without a house, naturally, but in terms of is it [the rollout of social housing] on track with our plans? Yes, it is,” Mr English said. “This year is the key year where we start delivery of 10,000 social houses.”