How Australia brought coronavirus under control 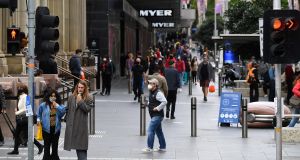 Melbourne, Australia: The state of Victoria has now reached 14 consecutive days without a single case, and its success is being replicated nationally. Photograph: EPA/James Ross

Kim Laurie worked as a florist for a quarter of a century before opening her own shop in Melbourne in July, just before the city was engulfed by a second wave of Covid-19.

“It was really devastating as I had no choice but to close the doors of the business for several weeks,” said Laurie.

Her flower shop is one of thousands of businesses hit hard by home confinement and nightly curfews, which lasted 112 days and have become hallmarks of Australia’s hardline approach to combating the pandemic.

Corporate leaders have criticised the measures as too strict and economically damaging. But the zero tolerance strategy worked: no new locally transmitted cases have been reported in Victoria since the lockdown was lifted two weeks ago.

Canberra has signed deals to acquire four separate vaccines and enough doses to cover its population thrice over. Among them is the vaccine developed by US pharmaceutical company Pfizer and Germany’s BioNTech, which Australia hopes to begin disbursing from March if it is approved.

Victoria has now reached 14 consecutive days without a single case, and its success is being replicated nationally. Australia recorded several so-called doughnut days this week – when no infections were found outside of quarantine centres – raising hopes that community transmission of Covid-19 can be eliminated.

The contrast is stark with the situation in other countries, such as the UK and US, where the virus is spreading rapidly and threatening to overrun health services, prompting several governments to seek advice from Australian officials.

“What we have done in Victoria is remarkable, particularly as it is in a democratic country that cannot necessarily act like China did to suppress the virus,” said Stephen Duckett, director of health at the Grattan Institute, a think tank.

Duckett joined Brett Sutton, Victoria’s chief health officer, in an online forum with Irish health experts this week to discuss the Australian state’s success, which he attributed to strong leadership and listening to scientific advice rather than relying on that of the business community.

“The idea that the health and economic strategies for Covid-19 are antithetical is a mistake – in fact they point in the same direction,” he said.

Life in Australia is returning to normal. A rugby match against New Zealand on November 7th drew 36,000 attendees in Brisbane and business confidence has rebounded to a seven-year high, according to Westpac’s consumer sentiment survey for November.

However, experts caution that comparing Australia with other nations is complex due to differences in geography, climate, political culture and the timeline of the wave of infections.

“Australia doesn’t have anything like the amount of international travel as Europe or the US – so I think we were lucky early on that we didn’t have the background infection in the Australian community that others had,” said Peter Doherty, who won the Nobel Prize for medicine in 1996.

“We sort of pride ourselves in what we call the larrikin culture – thumbing our nose at authority – but actually we are very respectful of authority,” he said.

The rules have been tough. Canberra imposed a cap on the number of residents and citizens allowed to fly into the country and international borders remain shut to non-residents. Even some internal state borders were closed, causing anguish for businesses and families.

Nevertheless, public compliance has been consistently high and surveys show trust in government has doubled since the start of the pandemic.

Australia’s response has not been without some stumbles. In March, authorities allowed passengers disembarking from the Ruby Princess cruise ship without testing, sparking a nationwide spike in infections. Melbourne’s second wave of Covid-19 was caused by a breach of hotel quarantine.

But authorities are credited with deploying large-scale testing and contact-tracing efforts to detect outbreaks to bring them under control quickly.

Victoria’s second outbreak differentiated itself in scale: it surpassed 20,000 cases, she added. The state’s contact-tracing system was also inferior and required an overhaul.

The lengthy lockdown, mandatory mask wearing and adherence to strict modelling, which predicted a strong chances of a recurrence if restrictions were removed too early, were critical, too.

Despite the lockdown’s success, many business owners believe it went on too long. Laurie said the tough measures caused mental health issues and put many businesses at risk. But she says the potential elimination of the disease is now enticing people out to shop.

“People aren’t scared any more and things are looking up. I think we have reached a turning point,” she said. – Copyright The Financial Times Limited 2020