INTO executive had urged acceptance of deal 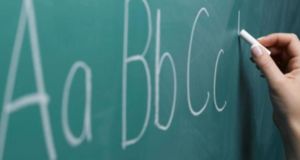 The union representing national school teachers is to announce the result of its ballot on the proposed new Haddington Road agreement on cutting the public service pay bill later today.

The proposed restoration of supervision and substitution allowances was an important factor in the Irish National Teacher’s Organisation accepting the new Haddington Road agreement, the trade union’s general secretary has said.

In a ballot, members of the Irish National Teachers’ Organisation (INTO) voted in favour of the proposed deal by 63 per cent to 37 per cent.

“I think teachers are comforted by the fact that while the money is being taken from them now, there is a clear restoration in the proposals that they will see that money coming back to their salary scales,” she said.

Members of the INTO decisively rejected the Croke Park II proposals several weeks ago. However the Government agreed to significant changes as part of the process that led to the emergence of the Haddington road proposals.

The executive of the INTO urged members to accept the Haddington Road proposals.

The decision by national teachers to accept the new proposals represents a major boost for the Government in its plans to reduce the public service pay bill by €300 million this year and €1 billion over three years as part of an agreement with unions.

Ms Nunan said it was clear that teachers viewed the Haddington Road proposals as better than the government’s alternative proposals.

“Teachers have not so much backed the Haddington Road proposals as rejected the government’s alternative,” she said.

Under the three-year Haddington Road proposals, which would come into force in July, teachers would cease to be paid the current supervision and substitution allowance .

However, salary increases of € 796 would be applied to incremental scale points in the 2016/17 and 2017/18 school years (total increase of € 1,592) in compensation for the loss of the supervision allowance.

Teachers earning less than € 35,000 would face one three-month increment freeze during the course of the agreement.

Teachers earning between € 35,000 and € 65,000 would have two increment freezes of three months each during the course of the agreement.

Teachers earning over € 65,000, along with other higher-paid public service staff, would face pay cuts. The reductions for teachers would run at between 5.5 per cent and 6 per cent.

However as part of the changes introduced under the Haddington road proposals, there is now a provision to restore original salary levels in two equal phases – on April 1st, 2017 and January 1st, 2018.

The Government has warned that it will impose cuts unilaterally on public service groups that do not accept the Haddington Road proposals.

Under legislation introduced last month, the Government can cut salaries for those earning more than €65,000 and suspend the payment of increments.

The executives of two other teaching unions, the Association of Secondary Teachers Ireland (ASTI) and the Teachers’ Union of Ireland (TUI) have effectively rejected the Haddington road proposals and, to date, have announced no plans to ballot members on its provisions.

Essentially the two union executives argued that the Haddingto Road proposals were not sufficiently different to the Croke Park II proposals which were rejected by their members.

Last week public sector members of the Unite trade union became the first to reject the Haddington Road agreement in a ballot.

The union , which represents around 6,000 public service staff, opposed the proposals by 72.6 per cent to 27.4 per cent.

Following a meeting at the end of May, the union had recommended that its 6,000 public service members reject the agreement on pay and conditions.

Unite’s regional secretary Jimmy Kelly said the Haddington Road proposals were bad for the public sector as they would take €1bn out of the sector and would lead to job losses.