Margin now closing between sides in final stages of campaign, according to Ministers

Fine Gael held their final press conference before the same sex referendum on Friday. Taoiseach Enda Kenny called on the electorate to say 'Yes to equality'. 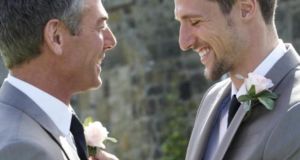 The Taoiseach said Ireland could make history by voting “yes to inclusion, yes to rights, yes to love and yes to equality, yes to equal marriage”. Photograph: Getty Images

As the same-sex marriage referendum campaign draws to a close Taoiseach Enda Kenny has made a passionate last- minute plea to voters to make history and vote Yes.

Both sides in the campaign made their final appeal to voters ahead of Friday’s’s referendum.

Some Government Ministers expressed concern on Wednesday night that the vote was tightening and there was a significant No side emerging in the final days of the campaign.

Earlier at his final press conference of the campaign Mr Kenny urged the electorate to give gay, lesbian and transgender couples the same chance in life as heterosexuals.

The Taoiseach said Ireland could make history by voting “yes to inclusion, yes to rights, yes to love and yes to equality, yes to equal marriage”. He said: “It is about the majority wanting to stand with and stand for the minority.”

“A Yes will obliterate the remaining barriers of prejudice or the irrational fear of the ‘them’ and ‘us’ in this regard.

“A very public Yes will create a very private and personal hope that for generations gay people could never imagine.”

Mr Kenny insisted that the electorate was being asked to vote solely on the extension of marriage to same-sex couples.

He said people were not voting on surrogacy or adoption rights and a Yes vote would have no effect on the institution of marriage.

Asked if he was satisfied by the level of canvassing by his party, Mr Kenny said: “We want 150 per cent from everybody. It is difficult to get.

“The Fine Gael party has a number of members who are conservative, I have said that publicly before. I have travelled a journey on this myself.

“What struck me was the power of the ordinary people in their ordinary lives. How can you expect them to be the people that they are if there is inequality in our society? The power of the vote is to give or to refuse.”

He said this would be “fundamental for the stability of society” and insisted the change to the Constitution would be challenged in the courts.

The archbishop said: “Marriage is about a man and woman coming together becoming father and mother and there is something in that. Changing that will leave people uncertain. I can’t promise what happens after the referendum.

“I am not a prophet or a fortune teller but this will be interpreted by the courts and in what way we don’t always know.”

Senator Fidelma Healy-Eames of the No campaign criticised the Garda Representative Association for supporting the Yes campaign, particularly when voters trusted the Garda Síochána to seal and secure all ballot boxes.

At the No campaign’s final press conference of the campaign David Quinn of the Iona Institute said “virtually all of official Ireland has been kitted out on the Yes side” and not for the first time in a referendum campaign.

The Irish Times contacted every member of the Dáil and the Seanad asking them how they intend to vote. Six Oireachtas members will not vote in favour of the amendment and one Fine Gael TD said he was undecided. Nine refused to state their intentions and 23 did not reply by last night despite several requests.