Property tax may be set against Consumer Price Index 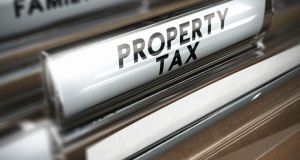 Government working on major policy move that will freeze the local property tax until 2018, and set it against the Consumer Price Index

The Government is working on a major policy move that will freeze the local property tax until 2018, and “decouple” future increases from rising house prices by linking the tax to the consumer price index (CPI).

According to a ministerial source, the two-step strategy will assuage the concerns of homeowners of a dramatic jump in property tax when the current three-year freeze ends after 2016.

The proposal to link increases to CPI, which was put forward by the Labour Party, met no resistance from senior Fine Gael Ministers, it is understood. According to the source, using the inflation index as a measure will give reassurance to homeowners that future increases will be modest and predictable.

The broad principle of the two-tier approach was informally agreed by both Coalition partners earlier this autumn.

A separate source accepted that the initial plan might have been rushed because of pressure from the troika to introduce a property tax.

“We need a more sustainable property tax model. The best is a site value tax which will neutralise fluctuations and create certainty,” said the source.

*This article was amended on Monday, December 1st