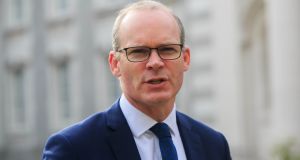 Tánaiste Simon Coveney has warned that it is “too early to be optimistic” about a deal being reached on the UK’s departure from the European Union and the Government is accelerating its preparations for a no-deal result.

As the Dáil passed the Brexit omnibus bill a day earlier than anticipated Mr Coveney said the negotiations “haven’t gone particularly well in Brussels” and he believed there would be “some pretty intensive negotiations through the weekend”.

He said it was time to “hunker down” and keep the media and others out of the conversation. There was a term used in Brussels talks that they “go into a tunnel. I think we probably will see a version of a tunnel in the next few days. I think that’s necessary by the way because this issue will not be resolved by a debate in the media.

“This issue will be resolved by professional negotiating teams finding a sensible way forward that both sides can live with that doesn’t undermine the deal already on the table but at the same time provides reassurance and clarification that many in Westminster are looking for.”

But Mr Coveney said: “The message I would give to those outside this House is that the Government is preparing, in fact we are accelerating our preparations now for a no deal just in case and everybody else should be doing the same.”

He described the Bill as an important “safety net” for Irish people as something they did not expect would happen but which had to be prepared for “just in case”.

The Tánaiste said they would “know a lot more this time next week” following the “meaningful vote” in Westminster with three possible votes – on a revised withdrawal deal, which if not passed will lead to a vote on whether to exit without a deal. If that vote is defeated a final one to delay the Article 50 exit process, will take place.

'Too early to be optimistic'

Mr Coveney was winding up debate on the Withdrawal of the United Kingdom from the European Union (Consequential Provisions) Bill which was passed by the Dáil without a vote.

The Bill is emergency legislation that provides for the status quo to be maintained between Ireland and Britain in the event of the UK crashing out of the EU without a deal.

Mr Coveney said “it’s too early to be in any way optimistic yet. The negotiations have been difficult and they haven’t gone particularly well in Brussels, yet but I suspect there will be pretty intensive negotiations through the weekend”.

He said he hoped there would be involved negotiations to try and put a package together “that can be persuasive in Westminster but at the same time not undermine the core meaning of the withdrawal agreement particularly from an Irish perspective”.

The Tánaiste, the Government and the EU were clear on “the parameters within which reassurance and clarification can be provided”.

He warned that “the assumption that all will be okay next week is not an assumption hat should be a basis for moving away from trying to be as prepared as we can be in the next 23 days should the unthinkable happen and Britain crashes out without a deal.

“I think it is unlikely but it is possible and while it’s possible we need to be alert to the preparations that are needed to protect Irish people and Irish businesses in that context.”

The Bill moves to the Seanad next week.