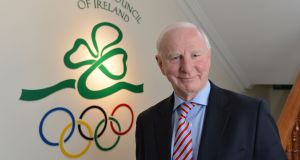 Former president of the Olympic Council of Ireland Pat Hickey is refusing to appear before an Oireachtas committee. Photograph: Alan Betson

The Olympic Council of Ireland is examining how it can break a “watertight” contract agreed by its former president, Pat Hickey, with ticket distributors THG.

In an opening statement to the Oireachtas committee on transport, tourism and sport which meets on Thursday to discuss the recently published Moran report into the Rio Olympic Games ticketing controversy, OCI president Sarah Keane is set to insist the executive board was kept in the dark by Mr Hickey and not informed of crucial decisions.

“It is evident that there were significant decisions taken with regard to future ticketing arrangements that were not brought before the OCI board,” she will say. Ms Keane insists there is no evidence of the deal in the offices of the OCI and its officials are basing their knowledge solely on documents given to them by THG.

The OCI has not seen original copies of the agreements and is working to determine if they are valid.

Legal advice to the organisation has prevented Ms Keane from detailing how much the deal is worth but it is believed there is a significant financial element involved.

Ms Keane said the OCI board will now consider whether it is appropriate such decisions should stand in light of recent criticism from a senior judge about the relationship between Mr Hickey and THG’s owner, Marcus Evans.

In a report published earlier this week, Mr Justice Carroll Moran found the two sought to protect commercial interests over the concerns of athletes.

The organising committee for the next games, the 2018 Winter Olympics in PyeongChang, South Korea, has already withdrawn permission for THG to sell tickets for Ireland, saying it had become aware of allegations that THG was involved in the attempted illegal resale of tickets in Rio.

Ms Keane will tell members of the committee the current board should be trusted with making decisions for future games, not previous members.

“I assure you that the OCI is committed to evaluating all agreements for future Olympic Games, including the screening and selection process of prospective ATR’s [authorised ticket resellers], in light of the recommendations contained in the report of the Moran inquiry.”

Ms Keane is likely to face robust questioning about her knowledge of the deal from TDs today.

It has emerged she met Mr Hickey on April 4th, 2017, and documentation and emails were offered to Ms Keane. However she has insisted she is unaware of the arrangement until July.

Ms Keane uses her opening statement before the committee to criticise Mr Hickey’s public utterances. She says there is a clear inference in the report that there was lack of transparency on the part of several individuals.

Ms Keane adds: “With hindsight, it is difficult to reconcile statements certain individuals made publicly with some of the documentation which has recently been uncovered.”

Mr Hickey will not appear before the Oireachtas committee claiming the hearings are a denial of his constitutional rights.

Members will discuss how to proceed at the meeting on Thursday but it is unlikely to be able to compel him to attend.

Minister for Sport Shane Ross will also give evidence before the committee and will defend his decision to establish a non-statutory inquiry into the controversy, which overshadowed Ireland’s participation in the Olympic Games in Rio last year.

Mr Ross will praise the work of Mr Justice Moran and use the opportunity to criticise Mr Hickey for failing to co-operate with the investigation.

He will also address concerns about whether the OCI will have its funding restored. The Moran report was ordered by Mr Ross after Mr Hickey was arrested and charged with alleged ticket touting and other offences in Brazil last August. The events prompted his resignation as OCI president after 27 years.

The former OCI president has maintained his innocence and insists he will cleared of all wrongdoing.