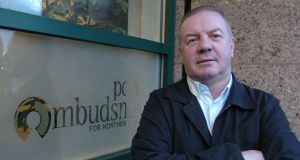 Raymond McCord: his son Raymond was murdered by a UVF gang in north Belfast in 1997. Photograph: Charles McQuillan/Pacemaker

An activist has launched the first legal challenge in Northern Ireland to Brexit on the grounds that it could undermine the Belfast Agreement and damage the peace process.

Raymond McCord yesterday lodged papers at the High Court in Belfast seeking a judicial review of the UK government’s plan to withdraw from the bloc.

His lawyers will argue that the government would breach its domestic and international treaty obligations under the Belfast Agreement by departing from the EU.

With similar legal action already under way in England, efforts are being made to secure an initial court hearing by as early as next week.

Mr McCord’s lawyers will also argue that any attempt to trigger article 50 of the Lisbon Treaty, the official mechanism for leaving the EU, without parliamentary approval would be unlawful and unconstitutional.

Oliver Letwin, the British minister in charge of Brexit talks, has said the UK government’s legal advice was that article 50 could be invoked under royal prerogative without parliamentary approval. British prime minister Theresa May told her European counterparts this week that Britain would not begin the formal process of leaving the EU until next year, but has not signalled how the process will be initiated.

Mr McCord, whose son Raymond was murdered by a UVF gang in north Belfast in 1997, is understood to be the first person in Northern Ireland to issue proceedings over Brexit.

“As a victim of the most recent conflict in Northern Ireland, Mr McCord is very concerned about the profoundly damaging effect that a unilateral withdrawal of the UK from the EU will have upon the ongoing relative stability in Northern Ireland,” he said.

Mr O’Hare said his client was also concerned that any withdrawal would be contrary to the UK’s international law obligations pursuant to the Belfast Agreement.

“He is also concerned about the abrogation of his fundamental rights that withdrawal will entail. In the alternative, any notification under article 50 should at least be done lawfully and constitutionally,” he said.

Mr O’Hare said the legal challenge was “an important constitutional case which engages the Northern Irish public interest in a way that no other case has or is likely to for many decades”.

Several legal challenges to Brexit have already been initiated in London’s high court.