'New politics’ budget fathered by many, owned by none 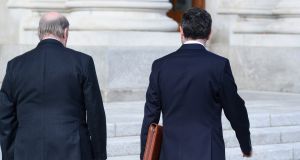 “We can build a fair and just society,” said Minister for Finance Michael Noonan as he began what could be his final budget speech.

“They will continue to strengthen our economy and our society,” said Paschal Donohoe, Noonan’s new partner in the Department of Public Expenditure and Reform, of his spending measures.

The statements of the two Ministers and the tax and spending package they outlined in the Dáil showed how far Fine Gael has come, by dint of the general election result and the minority government it now leads.

From US-style tax rates back towards a just society in less than one year, with public spending to the fore, this was a budget that took the message delivered in the general election and acted on it.

Budget day saw another revising upwards of the amount of money available for tax cuts and spending increases (the fiscal space) from €1.2 billion to €1.3 billion. This allows the Government to split the budget on a three to one basis between spending increases and tax cuts.

The confidence and supply agreement between Fianna Fáil and Fine Gael committed to a 2:1 split. Fianna Fáil will argue that the ratio should be greater, but Noonan has beaten them to it.

The Fine Gael election manifesto had also, in fact, argued a 3:1 split in favour of spending, although the party shifted towards greater spending relatively late in the day.

Those in Fine Gael who believe the party is bending too much towards the Fianna Fáil and Independent position of substantially increased public services will likely argue that today was nevertheless the wrong move.

As much as that not insignificant constituency in Fine Gael would argue for it to be used for tax cuts, or evenly split to maintain the ratio agreed with Fianna Fáil, it is likely the last minute extra €100 million was used to satisfy demands for increased welfare payments from Fianna Fáil and the Independent Alliance members of government.

From the much publicised €5 increase in the State pension to a swathe of other welfare increases, the budget saw something for almost everyone in receipt of welfare payments.

Yet some of it was populist and predictable. The first budget of the so-called ‘new politics’ era saw some of those who trumpeted that now tired phrase adhere to the oldest rules of old politics: look after the pensioners, for they will look after you.

Look after the pensioners

The prioritising of pension and other payments to the elderly by Fianna Fáil and some in the Independent Alliance must be viewed in that light.

While the composition of this government and the manner in which it will pass through the Dáil is certainly new, stuffing money into the pockets of the elderly is certainly not the radical change in politics promised when this Government was formed.

The scheme introduced by Minister for Children Katherine Zappone for subsidised childcare is, however, a welcome and long overdue initiative designed both to reduce costs for families and help many women, in particular, re-enter the workforce after they have started a family.

The emphasis on spending left Noonan with a relatively limited amount of money to spend on tax cuts, with small reductions in a number of USC rates and a scheme of income tax refunds to help first time buyers accumulate a mortgage deposit, a controversial move designed to circumvent Central Bank lending rules.

The shape of the budget, with its heavy emphasis on services, is nevertheless a reaction from mainstream politics in the shape of Fianna Fáil, Fine Gael and Independents, to the result of the general election.

This is a budget of the political centre as it now stands, fathered by many but not owned by anyone in particular: least of all the lead party of Government.