Mary McAleese: No vote would ‘cost our gay children everything’

Former President speaks of ‘hopes and fears’ for son, Justin, who is gay at LGBT event in Dublin 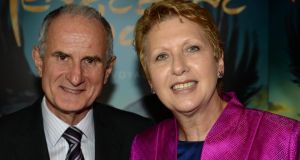 Former President Mary McAleese has spoken of her “hopes and fears” for her son, Justin, who is gay.

She was speaking at an event in Dublin hosted by BeLonG To, a national organisation for lesbian, gay, bisexual and transgender young people.

“We who are parents, brothers and sisters, colleagues and friends of Ireland’s gay citizens know how they have suffered because of second-class citizenship,” she said.

“This referendum is about them and them alone. The only children affected by this referendum will be Ireland’s gay children. It is their future which is at stake. It is in our hands.”

Mrs McAleese said Ireland’s gay citizens were too few in number to win the referendum on their own.

“We, the majority, have to make it happen for them and for all the unborn gay children who are relying on us to end the branding, end the isolation, end the inequality, literally once and for all,” she said.

“A yes vote costs the rest of us nothing. A no vote costs our gay children everything.”

Mrs McAleese said she and her husband Martin had been happily married for almost 40 years.

They were Catholics who had campaigned for marriage equality for gay citizens, “as a family, since long before we had children”.

She said a Yes vote on Friday would “right a glaring wrong”.

Happy marriages were good for individuals and for society, she said.

A Yes vote would give peace of mind about children’s future “and pride in our country’s commitment to true equality”.

She highlighted the differences between civil partnership and civil marriage.

Turning to the issue of surrogacy, she said the area needed to be regulated, and this was “a need that will exist whether the referendum is passed or defeated”.

She added: “No-one in Ireland, whether heterosexual or homosexual, has a legal or constitutional right to procreation using surrogacy. This referendum if passed will certainly not create any such right. It is a nonsense to think it could.”