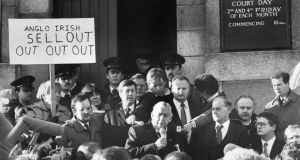 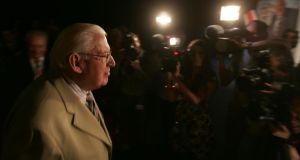 Ian Paisley makes his way to the stage to make his final address to a gathering of DUP members in Belfast to mark his retirement as leader of the DUP in May 2008. Photograph: Alan Betson/The Irish Times

Ian Paisley was probably the most fiery, uncompromising and bellicose Northern Ireland politician throughout the Troubles.

But late in life, one of the most turbulent figures in Northern Ireland politics throughout the 20th century underwent a transformation.

The man who constantly declared “No surrender” to Republican views, suddenly agreed to share power in a Northern Ireland Assembly with his arch enemies in Sinn Fein, and hold the top political office alongside former IRA commander and senior Sinn Fein figure Martin McGuinness.

On May 8th, 2007, he stood at a rostrum in Stormont, with British prime minister Tony Blair just behind him, saying: “If anybody had told me a few years ago that I would be doing this I would have been unbelieving.”

On another occasion he had said that Sinn Fein would govern Northern Ireland “over my dead body”.

No one had thought they would ever see Paisley and Gerry Adams, President of Sinn Fein, sitting round the same table.

Paisley, however, said they should never forget the past, but should not allow it to blight future generations.

And then, a few days later he was photographed shaking hands with another arch enemy, the then taoiseach Bertie Ahern and with Stormont’s new deputy First Minister Mr McGuinness.

Supporters of Paisley would deny that all this was a volte face, but it was certainly the most spectacular change of direction witnessed in Northern Ireland in living memory.

It was an unbelievable outcome for a region which had been torn apart by decades, even centuries, of sectarian violence and hate.

Given Martin McGuinness’s former role as an IRA leader, it was all the more astonishing to see these two men sharing a joke after years of hatred and bile.

Their apparently relaxed relationship even earned them the nickname “The Chuckle Brothers”.

Ultimately, in the spring of 2008, Dr Paisley retired as First Minister, a post taken over by his DUP deputy for many years, Peter Robinson, who also took over as leader of the party.

For some four decades, and right into his 80s, Paisley was a towering figure on the Northern Ireland political stage.

He was the ultimate Orangeman, denounced by his many political enemies — including the Ulster Unionist Party — as a stubborn trouble-maker, who would exploit any situation or development which he feared was leading to unification with the Republic of Ireland.

But Paisley would argue that he was merely defending the right of the majority of people in Northern Ireland to remain within the United Kingdom.

His contempt for the Ulster Unionists was complete and almost as intense as his dislike of the Republican movement and its methods.

He came to regard the UUP as the betrayers of Northern Ireland and went off to form his own party, the Democratic Unionist Party, which was hard-line and immovable in its beliefs.

Paisley, whose constant watchword was “No surrender”, delivered in a booming, thunderous voice, seemed to be opposed to every move introduced by the British Government in London to try to bring peace to the war-weary province.

Whether it was a peace process, a new form of devolved government or the machinations of the Ulster Unionists, Paisley would find something to protest about.

His speeches — he was easily the finest orator in Northern Ireland — were condemned by his opponents as inflammatory, bigoted and rabble-rousing.

With his huge physical frame and his booming preacher’s voice, Paisley was easily the most recognisable figure among Northern Ireland politicians for nigh on half a century.

His denunciations of the Pope — “the scarlet woman of Rome” — and the Roman Catholic Church in general were savage and uncompromising.

The “Big Man”, as he was known, maintained he never sold out on his strict principles.

When fighting elections, either for Westminster or Brussels, Paisley could command massive majorities.

He could not merely sway crowds, he could sway entire constituencies.

Ian Richard Kyle Paisley was born on April 6th, 1926, the son of a Baptist minister. He gave his first sermon at the age of 16.

He was ordained in 1946 and was Moderator of the Free Presbyterian Church of Ulster in 1951.

From the early 1960s, Paisley became little short of a colossus in Northern Ireland political affairs.

One of his first actions was to protest about the lowering of the Union Flag at Belfast City Hall as a mark of respect after the death of the Pope.

His political and religious activities were inseparable.

He forged links with Christian fundamentalists across the world, particularly in the US Bible Belt.

His critics accused him of having stood in the way of every political initiative in Northern Ireland since the 1960s.

Not only had he denounced, in the strongest imaginable language, what he saw as the evils of Irish Nationalism and Republicanism, but he also fought a long-running and bitter feud with the Ulster Unionists.

Virtually every Ulster Unionist leader of this period was described by Paisley as either a traitor or a Judas, determined to sell Northern Ireland into a united Ireland.

And although he condemned violence, both Republican and Loyalist, he was known to get involved with some unsavoury elements himself.

In 1981, he appeared on a hillside at dead of night with 500 men brandishing firearms licences and he later had a dalliance with Ulster Resistance, a movement with more than a whiff of paramilitary sulphur about it.

He sat in the Northern Ireland Parliament from 1970-72, where he made a name for himself as a man who could not be compromised.

He was once carried out of the chamber after a particularly vituperative outburst.

But before that he was lambasting the moderate Prime Minister of Northern Ireland, Terence O’Neil as a traitor to the Unionist cause.

In elections he invariably topped the polls.

In 1972 he formed the Democratic Unionist Party which proved a magnet at election times to Protestant voters.

He appeared to find fault with every new initiative, whether it was the Anglo-Irish Agreement in 1985, the Good Friday Agreement, power-sharing or new forms of governing the Province.

During the machinations involved in the Good Friday Agreement, Paisley denounced the Ulster Unionist leader David Trimble for selling out and predicted that Trimble would be cast into the political wilderness.

He also accused George J Mitchell, the former US Senate majority leader, who chaired the Good Friday Agreement negotiations, of being partial to Irish nationalists, denouncing him as “chairman of the Kennedy stable of the Boston lobby”.

Never would he sit down with Republicans to thrash out political initiatives.

He once said: “I am not going to sit down with bloodthirsty monsters who have been killing and terrifying my people.”

At Westminster he was by no means the prominent figure he had been in the Stormont Parliament, but he had his moments nevertheless.

More than once he was ordered out of the Chamber for using unparliamentary language — he accused ministers of lying — and refusing to withdraw his remarks.

Over the periods when direct rule was imposed from London, successive Northern Ireland secretaries of state had to endure his wrath.

He stoutly resisted any agreement which he believed would extend the influence of the Irish Republic into the affairs of Northern Ireland.

He opposed the Sunningdale Agreement in 1973 and was deeply involved in the Ulster Workers’ Strike which brought down the power-sharing administration in 1974.

Throughout his career, he remained fiercely opposed to any attempt to let Sinn Fein take up ministerial posts, or to set up cross-border bodies between Northern Ireland and the Irish Republic.

In 1999, he caused uproar by using parliamentary privilege to name people he said were behind a massacre in Northern Ireland 23 years earlier.

Into his seventies, his booming voice may have become a little weaker, but his resolve to retain Ulster as an integral part of the United Kingdom remained as powerful as ever.

With the virtual political massacre of the Ulster Unionists at the 2005 general election, Paisley became the leader of the largest Northern Ireland Party at Westminster.

He also seemed to mellow a little, but there was still no hint of compromise in his political dealings — until his ground-breaking deal with Sinn Fein.

Throughout his career, he said no one could ever accuse him of surrendering his principles.

Even so, his decision to share power with Sinn Fein caused a number of resignations from his Democratic Unionist Party.

In 2010 he confirmed he would not contest the general election, marking the end of his lengthy Westminster career.

It was announced late last year that the veteran clergyman was to retire from ministry in his church, but he was in good spirits when he attended a farewell service at the Martyrs Memorial church in Belfast at the end of January.

He is survived by his wife Eileen, whom he married in 1956. They have two sons - Ian Jnr holds his father’s former Westminster seat, while Kyle is a minister in his father’s church — and three daughters, Rhonda, Sharon and Cherith.