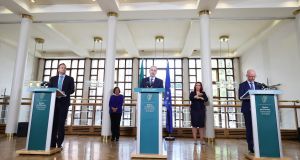 Sometimes they just make it too easy.

Confronted with Sinn Féin’s central critique of the “political establishment” – that it seeks to protect its own interests rather than those of “ordinary people” – Fine Gael and Fianna Fáil seem determined to give their opponents plenty of examples from which to choose.

A few weeks ago it was the Oireachtas golf dinner: one rule for them, another for us.

Last week it was approving the appointment of 10 advisers to Ministers of State on the day the pandemic unemployment payment was cut: the golden circle.

The Irish Times yesterday morning reported that Senator Michael D’Arcy, the former minister of State in the Department of Finance, is to resign his seat, leaving politics to run the Irish Association of Investment Managers.

With the spectacular timing with which this Government often seems to specialise, this was happening on the day Ministers met with leaders of the banks to discuss expiry of mortgage breaks for people whose income was slashed by Covid-19 and are unable to meet their repayments. The forbearance scheme ends on Wednesday. The banks promised to look at individuals on a “case-by-case basis”. It didn’t sound reassuring.

Sinn Féin leader Mary Lou McDonald was unimpressed. Ministers were looking for the banks to offer people “tea and sympathy”, she said.

“That’s no good to people who are very, very worried that come Wednesday, they find themselves without the breathing space that this mortgage holiday afforded to them.”

In the virtual room for the meeting with the banks, of course, was Brian Hayes, the former Fine Gael politician who was, as it happens, one of D’Arcy’s predecessors. He retired from politics last year to head up the organisation that represents and lobbies for the banks, and most recently came to prominence as a guest at that infamous Oireachtas golf dinner.

D’Arcy did not seek clearance from the standards in public office watchdog to take up the position – itself a deliberate loophole in the laws intended to prohibit conflicts of interest – leaving the association in the position where it was insisting last night it would do no lobbying for the next year.

Meanwhile, people all around Government were left face-palming at another self-inflicted injury.

The political establishment versus the ordinary people. The golden circle. Insiders versus outsiders. One rule for them, another for everyone else.

These are the classic tropes of populism and Sinn Féin is using them to piercing effect. The party is disciplined, relentless and strategic; practically every interview, speech, press release supports the message.