Government pledges to enact legislation on adoption rights ahead of vote 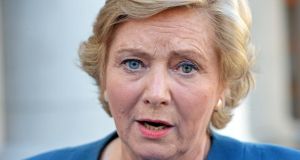 The Government has pledged to legislate for gay adoption rights before the same-sex marriage referendum. The reform will be part of the Children and Family Relationships Bill, the general scheme of which was published early last year by then minister for justice Alan Shatter, with a revised version published last September by his successor, Frances Fitzgerald. File photograph: Eric Luke/The Irish Times

The Government has pledged that legislation providing for adoption by gay couples will be enacted before the referendum on same-sex marriage in May.

The pledge came in the wake of concern in both Coalition parties that the first television debate on the issue on Monday night had raised doubts about potential pitfalls in the campaign.

At their weekly Cabinet meeting, Ministers agreed to hold another special meeting today to finalise the wording of the Bill providing for the referendum on same-sex marriage.

A Bill dealing with the referendum on reducing the age at which at individual can contest the presidential election from 35 to 21 is also expected to be finalised.

Both Bills are expected to be published by the end of the week and will be debated in the Dáil and Seanad in the coming weeks.

Once the Bills are passed by both Houses of the Oireachtas, a referendum can be held within a period of 30 to 90 days.

Taoiseach Enda Kenny has announced that referendums on both issues will be held in May on the same day as the byelection in Carlow-Kilkenny to fill the vacancy that was created by the appointment of Phil Hogan as European commissioner.

The Government had hoped the referendums and the byelection would be held in early May but they could be delayed for a few weeks depending on the passage of the legislation through the Oireachtas.

The debate on same-sex marriage on RTÉ’s Claire Byrne Live programme alerted Ministers to the potential problems that could arise in the referendum campaign on the issue of gay adoption.

The general scheme of the Bill was published early last year by then minister for justice Alan Shatter and a revised version of the scheme was published last September by his successor, Frances Fitzgerald.

However, the final version of the Bill has taken longer to complete than anticipated. A spokeswoman for the Department of Justice has confirmed it will be published next month and will be enacted into law before the referendum is held.

The Bill proposes key changes to the laws on adoption, custody and assisted human reproduction.

Whereas existing laws state that only married couples or sole applicants can seek to adopt a child, the Bill will extend the right to adopt to same-sex partners.