East Derry: Campbell still sitting at top of the tree 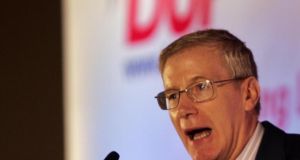 “We are on the way up in east Londonderry, in this part of the United Kingdom,” said Gregory Campbell. Photograph: Eric Luke

“When you get to the top of the tree you think ‘I must go down a bit’, but, we didn’t, we went up,” he said after the result. “I was pretty confident we would win, but not by the margin we did. It was a fantastic achievement.”

“In every count, in every category this party is on the way up,” he said. “Others may be on the way down, but we are on the way up in east Londonderry, in this part of the United Kingdom.”

The Cannabis Is Safer Than Alcohol candidate in the constituency, Neil Paine, said he was delighted with the 527 votes he polled in a constituency which contains a high student population.

Paine said he was also pleased that he polled 105 votes more than the Northern Ireland Conservative’s Liz St Clair-Legge who finished last of the seven candidates in this DUP stronghold.