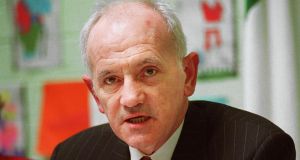 Limerick TD Dan Neville has been elected chairman of the Fine Gael parliamentary party in succession to Charlie Flanagan.

The 67-year-old TD is best known for his long-running campaign to raise the awareness of suicide as one of the most important issues facing Irish society.

He was elected tonight in a ballot of Fine Gael TDs, senators and MEPs who had four candidates to choose from.

Mr Coffey was widely perceived as the favoured candidate of the party leadership although Taoiseach Enda Kenny did not give any indication to the parliamentary party of his preference for any of the candidates.

Mr Neville, who was first elected to the Dail in 1997, was easily the most experienced of the candidates seeking the position.

He first contested a general election in Limerick West in 1987. He was elected to the Seanad in 1989 and he served in the Upper House from 1989 until his election to the Dail in 1997.

In that general election Fine Gael took two seats in Limerick West for the first time. Mr Neville famously got elected when he beat his running mate Michael Finucane by one vote to stay in the race.

He was appointed Fine Gael spokesman on Mental Health in 2007 and is currently a member of the joint Oireachtas Committee on Health and Children.

Mr Neville who was previously vice chairman of the party succeeds Mr Flanagan who served as chairman for three years before he resigned last week following appointment last week as Minister for Children and Youth Affairs.

Mr Neville, who is married with two sons and two daughters, was educated at Adare CBS, the University of Limerick and the School of Management Studies at UCC.