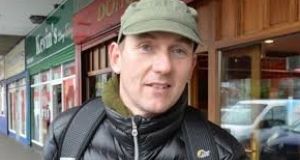 Gino Kenny TD, whose Bill for the legalisation of medicinal cannabis has received widespread support in the Dáil. Photograph: Alan Betson: The Irish Times

Legislation allowing for the use of cannabis for medicinal purposes is expected to pass through the Dáil.

A Bill proposed by People Before Profit TD Gino Kenny has secured the support of Fianna Fáil, Sinn Féin, Labour, the Social Democrats, the Green Party and his colleagues in the Anti-Austerity Alliance.

A number of other Independent TDs including Dr Michael Harty and the Independents4Change are also expected to back it.

The Independent Alliance, which includes Minister for Transport Shane Ross, Minister of State at the Department of Health Finian McGrath and Minister of State John Halligan, has also secured a free vote on the legislation.

This means the Bill will have the support of up to 90 TDs in the Dáil ensuring its passage through the House.

Minister for Health Simon Harris is likely to propose a reasoned amendment to the legislation.

Mr Harris is eager to see change on the issue of medicinal cannabis but is awaiting a report from the Health Products Regulatory Authority (HPRA) on the subject. It is due to report back by the end of January.

The Minister has met Mr Kenny and People Before Profit TD Richard Boyd Barrett to discuss the legislation.

Mr Harris has asked the deputies to consider adjourning the debate or suspending the vote until the report is concluded.

The Bill, which is to be debated on Thursday, provides for the regulation of cannabis for medicinal use so that patients can receive a legally protected, secure supply that is safe and effective.

However, it also proposes the establishment of a cannabis regulatory authority, which would be tasked with regulating the sale, labelling, advertising and marketing of cannabis and related products.

A Cannabis Research Institute, which would conduct or commission and publish cannabis-related research, has also been proposed.

Once the Bill is passed it will go to the Oireachtas health committee for examination.

While a number of parties have agreed in principle to support the Bill, it is likely they will seek a number of changes at committee stage.

Sinn Féin is to request the HPRA oversee the regulation of cannabis rather than establishing two new bodies. Fianna Fáil, the Independent Alliance and Labour are likely to seek safeguards to ensure this does not lead to abuse of the law or the decriminalisation of cannabis.

Under the Misuse of Drugs Acts 1977 to 2016, cannabis is subject to stringent controls. A doctor can prescribe cannabis products in limited circumstances if granted a licence by the Minister for Health. One cannabis-based medicine, Sativex, is authorised for the treatment of multiple sclerosis in limited circumstances. Legislation could be amended to allow for its prescription on a wider basis.

Cannabis for medicinal use is permitted in the Netherlands, Croatia, Malta, the Czech Republic, Australia, Canada and a number of US states.

Minister of State with responsibility for the National Drugs Strategy Catherine Byrne said there should be an option for people to access cannabis for medical use.

“I have had a lot of calls on the issue with people making very good cases in favour of legalising cannabis for medical use, and against. In my own position, as Minister of State, I would be concerned that there would have to be very tight controls on it,” she said.

“I wouldn’t want people to think we are legalising cannabis, which is something I’d be totally against. We don’t want to see cannabis available on prescription and then being dealt on the streets.”