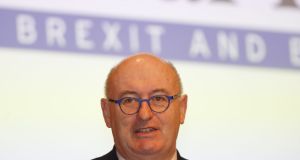 A no-deal Brexit would create a “foul atmosphere” between the EU and the UK and would have “serious consequences” for negotiating any future trade agreement, Ireland’s European Commissioner Phil Hogan has warned.

Mr Hogan, who will remain Ireland’s nominee to the next Commission which takes office in November and is tipped for the vital trade portfolio, made his remarks after days of sharp exchanges between London and the EU.

“If the UK fails to prevent a crash-out Brexit they should be under no illusion regarding the foul atmosphere they will create with their EU partners and the serious consequences this will have for negotiating any future trade agreement,” he told the Thomas Darcy McGee summer school in Carlingford Co Louth, just miles from the border on Wednesday.

Earlier, Tánaiste and Minister for Foreign Affairs Simon Coveney said that following the repudiation by British prime minister Boris Johnson of the commitments made by Theresa May about the Border in 2017, the Irish Government no longer had “a partner” in the British government.

The exchanges highlight the deteriorating atmosphere between Dublin, London and Brussels as Mr Johnson steps up his campaign to have the backstop, under which the UK has pledged to maintain EU standards on goods in order to preserve an open border in the absence of a trade deal, excised from the withdrawal agreement struck between Mrs May’s previous UK government and the EU.

Mr Johnson has said there can be no deal as long as the backstop remains in place, and has pledged to take the UK out of the EU on October 31st with or without a deal.

In the most sharply worded intervention yet from a senior EU figure since Boris Johnson became prime minister, Mr Hogan said that the new UK Government needed to “get real” about the backstop and “honour its word”.

“The backstop is not antidemocratic: it is a necessary, legally operative solution built into the withdrawal agreement,” Mr Hogan said.

He also issued another sharp warning to the British Government: “Gambling with peace and the Good Friday Agreement is not good politics,” he said. He said the UK had “signed up to the backstop in a legally binding agreement and now it must honour its word.”

He also reiterated that the EU was prepared to rework the political declaration, which sets out the direction for the future trade negotiations.

“The UK government needs to take responsibility for its choices before it is too late,” Mr Hogan said.

“Prime Minister Johnson’s hero is Winston Churchill and he seems to view himself as a modern day Churchill. However, in the event of a no deal Brexit, the UK government’s only Churchillian legacy will be: Never have so few done so much damage to so many.

Mr Coveney, meanwhile, firmly rejected the idea that there could be bilateral negotiations between Ireland and the UK in order to prepare for a no-deal on the Border. Ireland, he said could not do “a side deal” with the UK.