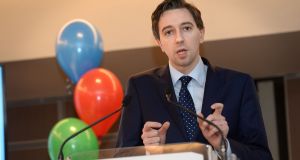 Minister for Health Simon Harris: with Finian McGrath, he will ask for an early signature from the President, Michael D Higgins, to ensure up to 330,000 people can avail of lower costs. Photograph: Dara Mac Dónaill

Up to 10,000 children in receipt of domiciliary care allowance will be given a medical card from June under legislation that is to be considered by the Government on Tuesday.

Minister of Health Simon Harris and Minister of State at the Department of Health Finian McGrath are to bring a memo to Cabinet requesting approval to proceed with the decision, which was agreed as part of last year’s budget.

The proposal will give 9,800 severely disabled children under the age of 16 an automatic right to a medical card. This will be introduced from June 1st with an online pre-registration system to be available a month earlier.

The legislation will also allow for a reduction in the prescription charge for medical card holders over 70 from €2.50 to €2. This will take effect from Wednesday. A €20 monthly cap will also apply to this group, €5 less than all other age groups.

Mr Harris and Mr McGrath will ask for an early signature from the President, Michael D Higgins, to ensure up to 330,000 people can avail of lower costs.

The measure was sought by the Independent Alliance and secured in the budget negotiations with their colleagues, Fine Gael. It was initially resisted but agreement was reached hours before Minister for Finance Michael Noonan unveiled the package in October.

The introduction will be on an administrative basis and will allow the Minister for Health to vary either or both of the amounts.

Meanwhile, Minister for Social Protection Leo Varadkar is to seek Cabinet consent to make a number of changes to the community employment schemes, Tús and Gateway.

The three schemes are offered to the long-term unemployed and other disadvantaged people to get back to work by offering part-time and temporary placements in jobs based within local communities.

The Minister is seeking to link the number of scheme places to the number of people on the Live Register. Mr Varadkar is also proposing to widen the pool of people who can access these programmes but reduce the entry age to 21, and allow people who have “timed out” to have another chance.