Stephanie Knox, who helped at scene, is claiming against estate of the deceased 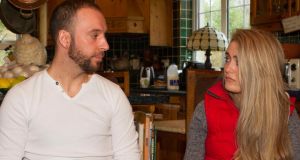 Davitt Walsh and Stephanie Knox. On the evening of the tragedy Mr Walsh and Ms Knox had been walking nearby when they saw the McGrottys’ car in the water. File photograph: North West Newspix

A woman who helped at the scene of the Buncrana pier drowning tragedy has made a claim for damages against the estate of the deceased.

The couple’s baby, four-month-old Rioghnach-Ann, was rescued by passerby Davitt Walsh and was the sole survivor of the tragedy.

It stated that she wishes to claim an undisclosed sum from his late son’s estate for loss of earnings and other matters.

On the evening of the tragedy Ms Knox and Mr Walsh had been walking nearby when they saw the McGrottys’ car in the water.

Ms Knox, a cardiac physiologist, took the baby from Mr Walsh and brought her to their car to warm her up while he returned to the water to try and save other members of the family.

“It was a private delivery and I had to sign for it,” he said.

“It was a big envelope full of legal documents – hard for the ordinary man in the street to understand.

“Then I saw the name Knox and realised it was from the girl that took the baby when she was brought out of the water that day.”

Mr McGrotty said he did not know why the package arrived at his house, as he is not the executor of his son’s estate.

Ms Knox’s sister Laura said on Facebook that her sister had been informed by gardaí that people who were present on the pier on the day of the tragedy were lodging claims, so she had gone to her solicitor for advice.

“She was under the impression that the claim was against Donegal [County] Council and due to the same reason that the family were claiming for – algae being on the slipway and other reasons,” she wrote.

“That day has ruined her life forever, witnessing five people die in front of her, and her life will never be the same.”

The inquest into the deaths, in November 2017, returned a verdict in each case of death by drowning and misadventure.

Stephanie Knox’s solicitor, Maoliosa Barr, told the Irish News his client was “making a claim, on the advice of her legal team, against Donegal county council and the estate for injuries sustained.”

However he also said “she did not send any letter to the McGrotty family”.

The Irish News said it is understood the letter was sent by the Dublin-based Personal Injuries Assessment Board, which provides independent assessments of non-medical compensation claims in the Republic.