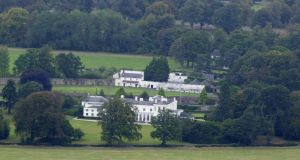 Deerfield in the Phoenix Park: the late 18th century home has been the US ambassador’s official residence in Ireland since 1927. Photograph: Bryan O’Brien 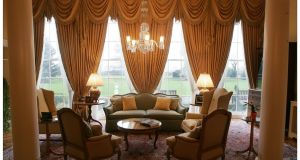 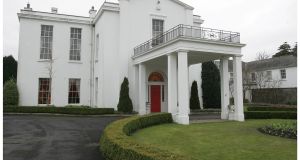 Varney has “major” plans for Deerfield but they do not extend to revamping the residence of a Trump ambassador in the flamboyant, gold leaf-style the president likes. Photograph: Alan Betson 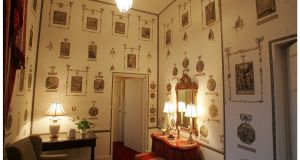 A room in Deerfield in the Phoenix Park. Photograph: Alan Betson 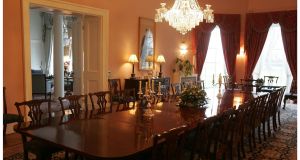 Donald Trump’s choice for US ambassador to Ireland has not been officially confirmed yet, but he has already asked a decorator to plan a revamp of Deerfield, the residence of the ambassador in the Phoenix Park in Dublin.

US interior designer Carleton Varney, who has decorated Dromoland Castle, Adare Manor and even the White House for Jimmy Carter, has been hired by Irish-American businessman Brian Burns, whom Trump has said is his pick to be the ambassador to Ireland.

Mr Varney has made contact with the ambassadorial aide in Dublin in charge of the Georgian mansion about the 241-year-old house.

Speaking enthusiastically about what he has in mind for the property, the 80-year-old designer said he did not think the planning was premature.

“It’s imminent,” he said when asked when the Florida-based Mr Burns will be confirmed by the US Senate as the country’s next ambassador in Dublin.

Friends of Mr Burns have committed more than $1 million (€950,000) to fund the refurbishment of Deerfield House and other projects that the Palm Beach resident will undertake in Ireland if confirmed as ambassador, his US-based adviser Turlough McConnell said.

Mr Varney is planning a design that combines Deerfield’s dual role as a formal residence for a US envoy and as a home for Mr Burns (80) and his wife, Eileen.

“What we are planning to do is to make it for both ways, for entertaining as well as to give it a very warm, cosy and cared-for look,” he said in a telephone interview from the offices of his decorating company Dorothy Draper & Company in Palm Beach, Florida.

“It will be a very homely experience while at the same time retaining the tradition of being a ceremonial place as well.”

Mr Varney is a frequent visitor to Ireland. He divides his time between homes in Trump Tower in New York, Palm Beach near Mr Trump’s Mar-a-Lago resort and an 18th century house in Pallaskenry, Co Limerick.

Mr Burns told The Irish Times in January he wanted to give the Irish diaspora a chance to make donations for Deerfield in order to make it “a magnificent modern statement”.

The late 18th century home, which stands across from Áras an Uachtaráin, has been the US ambassador’s official residence since 1927. Prior to 1922, it was the home of the chief secretary of Ireland during British rule.

Mr Varney said he decorated parts of Deerfield during the late Richard Egan’s time as ambassador in 2001 so he knows the property well. “I think of it all the time because I walk through the rooms,” he said.

He has decorated homes for Mr Burns and his wife and does not see Deerfield changing radically, though he suggested that the couple may opt for more ambitious colours inside.

“Eileen is not a woman who is afraid of colour,” he said. “We want this embassy residence to be, in longevity, a very happy inviting place for lots of people to enjoy.”

While Mr Varney has “major” plans for Deerfield, they do not extend to revamping the residence of a Trump ambassador in the flamboyant, gold leaf-style the president likes.

“The house is like an old lady, a beautiful woman: you can dress her in the period and in the time but you don’t put her in a mini-skirt or try to set her in another environment,” he said.

A neighbour of Mr Trump and his wife Melania in Trump Tower, Mr Varney said the couple brought their own unique style to their residence.

“I do know the Trump style but that is what pleases them. What pleases another traditionalist is another thing,” he said.

“One of the things I believe in: taste is like the fog . . . you can see it and you can feel it but you can never touch it and in my head there is no thing called good taste or bad taste; there is only taste.”