Three hurt after double-decker bus and van collide in Dublin

Van and Dublin Bus bus, which had no passengers, collide on Townsend Street 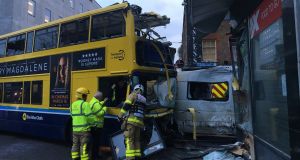 The collision between the Dublin Bus and the van occurred at the junction of Townsend St and Shaw St in Dublin. Photograph: Jack Power

Three men have been injured in a traffic collision involving a bus in the city centre, on Tuesday morning.

Shortly after 7am a white van and a Dublin Bus vehicle collided on Townsend St, leaving the driver of the van seriously injured. A passenger in the van was also taken to hospital.

There were no passengers on the bus at the time of the crash. The bus driver was shaken by the incident and taken to hospital.

The collision occurred at the junction between Townsend St and Shaw St, in the city centre.

Paramedics treated the van driver at the scene, before taking him to hospital.

Gardaí cordoned off access to the road from both sides, and three fire engines also responded to the collision.

The front of the bus was severely damaged and the top floor windows shattered in the collision.

The top of the bus collided with a vacant office block, after the initial traffic collision, causing a small amount of damage.

1 Shops, hairdressers and hotels expected to reopen next week as Level 5 restrictions are eased
2 Almost 15% of Irish adults have been raped, study finds
3 Covid-19: Museums, cinemas set to reopen next week as Varadkar warns of New Year restrictions
4 Eir to issue apology for poor customer relations service
5 Covid-19 response: Has Level 5 been worth the cost?
Real news has value SUBSCRIBE