Annual celebration marks beginning of summer in Poland celebrated since 1952 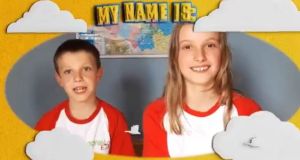 The video, which features contributions from 30 Polish kids who have grown up in Ireland, calls on their Irish peers to join in with the children’s day celebrations.

Celebrated in Poland on June 1st since 1952, the day marks the start of summer and also the importance of children’s rights as the foundation of happiness for young people.

In the video, posted on Twitter by Ireland’s Polish embassy, children share some Polish traditions and history with viewers to “cheer you up a bit under the lockdown”.

HAPPY CHILDREN'S DAY! Watch this cutest video ever - best wishes from Polish kids to Irish kids on their most special day on 1 June!! 30 Polish kids living in Ireland made those recordings to celebrate with their Irish friends and also to cheer them up under the lockdown! pic.twitter.com/ZeasLokDlP

“Poland is the country of castles and palaces, it is where kings and queens used to live for centuries,” explain the children. Polish legends are also “all the best” because “they are all true”, add the kids.

Poland’s ice-cream and sweet waffles get a shout out in the video along with the country’s high mountains where you can go skiing or hiking, the seaside and the “crystal clear lakes for rowing and sailing”.

“We love going to Poland and we hope you’ll join us for our next trip,” say the children.

Data from the 2016 shows most Poles in this country are young, with nearly 50 per cent aged between 30 and 40 years of age. Many of these would have come to Ireland post EU enlargement in 2004 seeking work opportunities and have decided to settle and have a family here.

Before the pandemic, almost three quarters of Polish nationals aged over 15 years were working, compared to 53 per cent of the overall proportion of the Irish population who were at work.

When the last census was conducted, more than one-fifth of poles were working in retail while 18 per cent worked in manufacturing and 15 per cent in accommodation and food services. Some 5,072 Poles have become Irish citizens in the past four years.