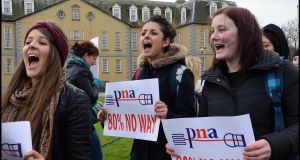 File photograph of members of the Psychiatric Nurses Association protesting in Dublin. Psychiatric nurses have become the latest group in the public service to press the Government for an accelaration in pay restoration. File photograph: Brenda Fitzsimons/The Irish Times

Psychiatric nurses have become the latest group in the public service to press the Government for an accelaration in pay restoration.

A spokesman for the Psychiatric Nurses Association said on Monday that there was a need to “bring forward” the payment of money to staff due under the Lansdowne Road Agreement.

Under the deal, all public service staff earning less than €65,000 per year are set to receive a €1,000 payment in September next year.

Last week, the Irish Nurses and Midwives Organisation (INMO) said it would be seeking an immediate acceleration of the reversal of the pay cuts and pension levies imposed under financial emergency legislation during the economic crisis, as well as the ending of the requirement to work additional unpaid hours each week.

It also said it would be conducting a national ballot to seek a mandate to commence industrial action if bed numbers and services were not reduced in line with available staffing levels.

Meanwhile, in a bulletin to members, the general secretary of the Public Service Executive Union, Tom Geraghty, said the “Government’s position [on public service pay] that nothing can happen until after the [Lansdowne Road Agreement] expires [in 2018] is looking increasingly unsustainable”.

“Furthermore, the pace of restoration will need to be quicker if public servants are to be treated on the same basis as the now emerging new headline increases in pay rates.”

Mr Geraghty, who is also secretary of the public services committee of the Irish Congress of Trade Unions (ICTU), said serious industrial relations issues were emerging, “particularly with members of the gardaí threatening industrial action”.

“The position of the ICTU public services committee is that we were all affected together and that we must all come out of emergency legislation together.

“Furthermore, in view of the healthy economic growth, we have been calling now for about six months for the accelerated restoration of losses imposed on public servants.

“The next set of pay negotiations will have to have as its purpose the elimination of the remaining emergency cuts.

“To that end, the first task of the [Government’s] Public Service Pay Commission has to be to chart a route out of this legislation and to assist negotiations, most likely in the first half of next year.

“It is essential that negotiations on public service pay are concluded well in advance of this date.”