Pope in Ireland: plenty of rooms at the inn, hoteliers say 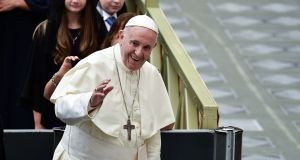 Pope Francis waves as he arrives for his weekly general audience at the Vatican this week. Photograph: Vincenzo Pinto/AFP/Getty Images

Hoteliers have said initial hype around the papal visit’s anticipated impact on accommodation never materialised, with availability and prices remaining typical of any weekend in the capital.

When it comes to putting pressure on capacity, the holy trinity of Ed Sheeran, The Rolling Stones and Taylor Swift - all of whom played in Dublin at the start of the summer - had a far more pressing effect than the pope.

Despite expectations of about half a million pilgrims making their way to the city on Sunday, those in the accommodation business said the hotels’ ability to cope is due to a combination of factors - in particular, the balancing effect of more typical visitors avoiding the city.

“There has been a lot of hype around this weekend and there was a lot of talk about hotels being jammed full around the city,” Pat McCann says, chief executive of the Dalata Hotel group.

“Around the city tonight (Friday) there is a lot of rooms available.”

Mr McCann, whose company run 18 hotels in the capital, says typical visitors are deterred during such specialised events, an effect experienced in London during the Olympics and in the UK more broadly during the Rugby World Cup.

“You would expect hotels to be chock-a-block but that’s not really what happens,” he said.

Those in the sector believe there will be hotel availability at good value rates throughout Saturday and Sunday, and compare the demand to a normal weekend.

While Dublin has a well-documented shortage of hotel rooms, many of the thousands coming to the Phoenix Park will return home on the same day; others will stay with family.

Peter Collins, chairman of the Dublin branch of the Irish Hotel Federation (IHF), agreed the hype had not translated to “no availability” signs and that many tourists would leave Dublin alone this weekend.

“When the pope confirmed [his attendance] there would have been a bit of hype but that’s all it was, hype,” he said. “It wasn’t going to change the demand in the city. People are pre-booking anyway.”

Mr Collins said the event, with plenty of notice and bookings in advance, was not comparable to major GAA fixtures where there is always a last minute scramble for tickets and, by extension, hotel rooms. Major concerts too tested the city’s capacity.

“[The papal visit] is more a considered and a longer term booking,” he said.

That is a pattern reflected in overseas booking for the World Meeting of Families event too. Martin Mooney, a group sales executive at Joe Walsh Tours, said foreign arrivals had long been in the planning.

The company, which has recently been expanding its operations into Ireland, offering organised tours religious sites, has facilitated groups from China, South Africa, the US and the Philippines among elsewhere.

Many of them have arrived in Ireland at least a week in advance of the papal visit, taking in sites such as St Patrick’s Cathedral, Knock and Croagh Patrick.

“We would arrange masses for them as well at these locations even if there weren’t masses on,” he said of the groups who have made the pilgrimage. If anything, these travellers are too organised to find accommodation a problem.

“A lot of the American groups started getting in touch over a year out, which is probably a bit too early because a lot of the hotels aren’t even ready to take bookings,” Mr Mooney said.

Meanwhile, there is little expectation that homeless people reliant on hotel accommodation would be forced to leave Dublin over the weekend.

The Dublin Region Homeless Executive said it had a high level of contingency in the city and there had been no reports of families being told they could not be accommodated.

1 One hundred Irish retailers for all your online Christmas shopping
2 Des Bishop apologises to Traveller community for comments in interview
3 Miriam Lord: All test and no trace makes Jack and Heaven knows who else, a very ill boy
4 Gym owner plans to defy restrictions and open
5 Varadkar says ‘dumping’ contact tracing problem on GPs ‘unfair’
Real news has value SUBSCRIBE