Officials and politicians ready for snap election if government falls

Political crisis: ‘We have everyone from polling officers to count staff’ 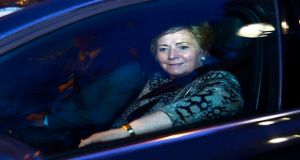 Que sera, sera – it may be an election that nobody wants but if it comes to pass both the political parties and the officials charged with ensuring it goes off smoothly are ready to activate well established plans and procedures even if it’s only a short campaign.

According to Cork City Sherriff Martin Harvey, responsible for running the vote and the count in Cork North Central and Cork South Central, every sheriff and returning officer around the country has to be prepared for a possible snap election.

“We’re ready to go. You have to be; all sheriffs have a system that slots into place, you are always at the ready and you press the button and you go to the next step. The only difference with a three-week campaign is that you have to apply yourself a bit more.

“We have everyone from polling officers to count staff on our computer system so if an election is called , we are ready to email them,” he said, adding that if Cork City Hall isn’t available to use as a count centre due to some Christmas event, alternative venues at Nemo or Neptune are available.

Cork County Sheriff, Sinead McNamara is similarly prepared for a general election taking place across her three county constituencies, Cork East, Cork North-West and Cork South-West with alternative count centres available if some venues such as schools are occupied with exams or concerts

“As a returning officer, you always have to be at the ready in case of a snap election like this so the mechanisms are in place even though if we do have an election now. I will be more challenging than normal because you are trying to organise it in the middle of winter.

Similarly the political parties are on standby with Cork South-West Fine Gael Constituency chairman JJ Walsh admitting that a winter election poses a different type of challenge even though he reckons a convention to select the party’s candidates could be held within a matter of days.

“There has been no convention here but we could have one within a matter of days – it’s a big unwieldy constituency taking in three peninsulas. But the big problem is that with the winter nights, a lot of people in rural areas won’t open their doors so you just have finish up canvassing by 4.30pm.”

Up in Cork North-West, Fianna Fáil Comhairle Ceanntair chairman Dan Dennehy is equally sanguine, acknowledging that no one wants a winter election but Fianna Fail members are ready to answer the call and head out if the Dáil is dissolved.

“We have two sitting TDs here and a convention could be held within two days. There wouldn’t be any problem in getting posters organised either and we have plenty of people on the ground. It’s a bad time for an election but if there’s an election, there’s an election and no more about it.”