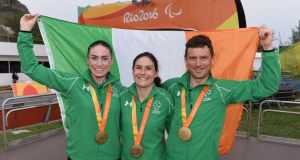 Eve McCrystal, Katie-George Dunlevy and Eoghan Clifford with their medals at the the Rio Paralympic Games. Photograph: Diarmuid Greene/Sportsfile 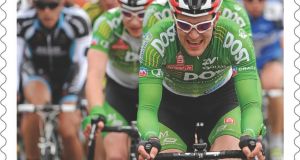 One of An Post’s new set of stamps celebrating cycling in Ireland. Photograph: Sportsfile

A set of new “Cycling in Ireland” stamps have been launched by An Post in recognition of the growing popularity of cycling in the country and its positive impact.

The release of the four new stamps on Thursday follows the success of the Irish paracyclists in the Rio Games - Eoghan Clifford, Katie-George Dunlevy and Eve McCrystal - who won three medals for Ireland on Wednesday.

The 72c stamps showcase four different forms of cycling - commuting and safety, family and leisure, sportive and charity and high-performance and competition.

Cycling has grown hugely in popularity among all ages in recent years.

There are now 450 registered cycling clubs across Ireland.

Cycling at an elite level is also back in the headlines, with sportsmen and women such as Dan Martin, Nicolas Roche, Sam Bennett, Ryan Mullen, Caroline Ryan, Olivia Dillon and Lydia Boylan all competing for Ireland on the world stage.

The new cycling stamps are available in all major post offices across Ireland and on www.irishstamps.ie.