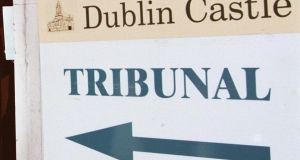 The cost of the Moriarty tribunal has topped €50 million to date, according to figures released by the Department of the Taoiseach.

Accounts released by the department show that between January 1st and the end of November 2014, costs ran to almost €3.7 million encompassing both legal costs – which include third party fees and payments made to members of the tribunal’s legal team – and administration costs.

Over two-thirds of the payments in 2014 related to third party legal costs, which totalled over €2.5 million. The highest of these related to the estate of the late former taoiseach Charles Haughey.

The payment came to €1.36 million in what the department has said is the “full and final settlement” in relation to these costs.

Mr Haughey’s estate had initially lodged a claim for €3.92 million in legal costs from the tribunal.

A further €109,000 was paid in respect of the legal costs of Mr Haughey’s sons, Conor, Ciaran and Sean Haughey and his daughter Eimear Mulhern.

Other substantial legal costs paid in 2014 included €324,219 third party costs for Carlisle Trust, a company formed by the late Kerry property developer John Byrne, and €312,031 in third party costs made in respect of Persona Digital Telephony, a consortium that lost out to Esat Digifone in the awarding of the State’s second mobile phone licence in the mid 1990s.

The total third party legal costs, in respect of 49 parties, paid by the tribunal between 2012 and the end of November 2014 has now exceeded €5.3 million.

They consisted of €208,663 paid to tribunal solicitor Stuart Brady and €160,823 to barrister Stephen McCullough.

The total fees paid to members of the tribunal’s legal teams to date is close to €35 million.

The three highest paid members of the tribunal team were Jeremiah Healy SC, John Coughlan SC and Jacqueline O’Brien SC who received €9.5 million, €9.3 million, and €6.9 million respectively between the time of the tribunal’s establishment in 1997 and the time they ceased work between 2010 and 2011.

The Moriarty tribunal, official titled the Tribunal Report into Payments to Politicians and Related Matters, was set up in 1997 to inquire into payments to Mr Haughey and to former Fine Gael minister Michael Lowry.

A lengthy part of the tribunal’s work arose from the 1995 mobile phone licence competition, won by Esat Digfone.

Mr Lowry is currently challenging a tribunal finding that he is only entitled to one-third of his costs for appearing before it.

Mr Lowry holds that his associated legal costs will run into millions, given his centrality to the tribunal’s investigations, the assistance he gave it and the complexity of the matters involved.

The tribunal published two reports: one in 2006 and a second two-volume report in 2011.