Janssen to invest over €300m in Ringaskiddy plant 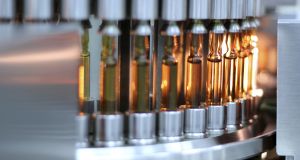 “The pharma industry makes a huge contribution to the Irish economy in terms of jobs and manufacturing exports, and is one of our fastest-growing sectors,” said Tánaiste Frances Fitzgerald.

Cork has received a significant jobs boost today with confirmation by Janssen Sciences Ireland that it is to invest more than €300 million in an expansion of its manufacturing plant at Ringaskiddy that will create 200 new jobs.

Work on the expansion will start later this month and will provide employment for up to 450 people during the two-year construction period which will see the existing manufacturing space in the lower Cork Harbour area increase by almost 20,000sq m.

Tánaiste and Minister for Business Frances Fitzgerald warmly welcomed the expansion which will see Janssen staff numbers at Ringaskiddy increase to more than 750 while its workforce in Ireland across 11 sites in Cork, Dublin and Limerick will increase to 2,700.

“The pharma industry makes a huge contribution to the Irish economy in terms of jobs and manufacturing exports, and is one of our fastest-growing sectors. This expansion announced today by Janssen is a strong commitment to our country and I wish them continued success.”

Confirming the expansion announcement on behalf of Janssen, Remo Colarusso, vice-president of manufacturing and technical operations, said the expansion of the Ringaskiddy facility will increase the company’s global manufacturing capacity for biologic medicines.

“Our Ringaskiddy site is an important part of Janssen’s global manufacturing network and this expansion will allow us to grow in a location that offers an advanced infrastructure, a high-performance culture and top-level talent,” said Mr Colarusso.

Kyran Johnson, general manager of Janssen Supply Chain Ireland, said the expansion was a significant vote of confidence in Ringaskiddy and would allow the plant to meet the growing demand for the company’s medicines in the areas of multiple myeloma, rheumatoid arthritis and Crohn’s disease.

Martin Shanahan, chief executive of IDA Ireland, said that Janssen, which is headquartered in Belgium and is part of the Johnson & Johnson Group, has a considerable footprint in Ireland with operations in Dublin, Limerick and Cork, and the latest expansion was a significant boost to the Cork region.

“This investment in Ringaskiddy will have a significant economic impact in the southwest region both during the construction phase and when the facility is fully operational,” said Mr Shanahan, noting that the company has been operating at the 40-hectare Ringaskiddy site since 2005.