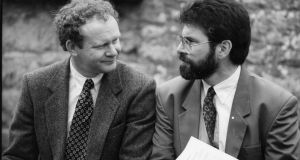 A file image from 1994 of then Sinn Féin president Gerry Adams (right) and Martin McGuinness. Photograph: The Irish Times

Persuading the IRA leadership to call its August 31st, 1994 ceasefire was a “close call”, former Sinn Féin president Gerry Adams has stated when marking the anniversary of the cessation.

Mr Adams referred to how he and the late Martin McGuinness met the IRA army council three times in August 1994 to discuss the ceasefire and that how, even when it agreed to the cessation, some army council members remained opposed.

While there have been numerous allegations that at various times that he and Mr McGuinness were on the seven-member IRA army council, Mr Adams made no reference to these claims in his article looking back on the ceasefire in this week’s Andersonstown News.

Mr Adams has always denied he was in the IRA.

“At a briefing in early August with the IRA leadership Martin was able to tell it that the Irish Government had provided written assurances that if there was a cessation there would be an immediate response on practical matters,” Mr Adams recalled in the article.

“Sinn Féin would be treated like any other political party. This would include a speedy meeting between the [then] taoiseach, Albert Reynolds, myself and John Hume. ”

Mr Adams said the IRA leadership listened attentively to what he and Mr McGuinness had to say and it was agreed to meet again to receive an update from them.

“It was coming close to ‘make your mind up time’. Everyone at the meeting knew this. Some of the leadership were against a cessation. They had been very frank about that. It was going to be a close call,” he said.

Around that time Mr Adams said Irish American leaders provided assurances that they would lobby on behalf of Sinn Féin if the ceasefire was called.

What was also crucial for the IRA leadership was that the late IRA leader Joe Cahill would get a visa from the then US president Bill Clinton to travel to the United States.

Said Mr Adams: “fundamentally it was a test to see if the Irish Government was prepared to take on the British and if it could win such a political battle with the British within the US administration. It would also be an important indicator of how seriously the Clinton administration intended to take the issue of peace in Ireland. ”

Mr Adams and Mr McGuinness held a second “inconclusive” meeting with the army council in August 1994 where the issue of Mr Cahill’s visa “became an even greater test”.

That visa was granted on August 29th.

Mr Adams then described the third, conclusive meeting with the leadership. He recalled: “Martin and I again travelled to meet the army council. A package had been agreed. It was now over to the IRA leadership.

Everyone at the army meeting was a little tense. Martin McGuinness spoke eloquently. So did others. For and against.

One of Martin’s great qualities was his sense of conviction and confidence. He could bring a strength to a debate which was very, very compelling. Even if you might not agree with him you knew he was going to deliver on any commitment he made or die trying.

“The struggle wasn’t ending we told them. They knew that, of course.

“In many ways, I said, the easy decision was for the IRA to continue to fight. That was the low risk option. The high-risk option was the one we were arguing for.

“It meant uncharted waters. It would involve compromises. It could mean risking - and losing - everything. But we could also be the generation who would win freedom.

“We could set in place a process which could create new conditions for a genuine and just peace and from there build a pathway and a strategy into a new all- Ireland republic.

“A formal proposal was then put to the meeting. The vote was for a cessation. It was not unanimous but those who voted against pledged their support to the new position. Unity, they said was essential.

“On Wednesday, August 31st at noon the IRA declared its ‘complete cessation of military operations… We believe that an opportunity to create a just and lasting settlement has been created’.”

The IRA ended its ceasefire in February 1996 but it was restored in July 1997, helping create the conditions leading to the powersharing Belfast Agreement of Good Friday 1998.

Added Mr Adams: “The peace process and the dramatic changes that have taken place in the last 25 years owe much to the courageous decision by the army council and those other volunteers who followed the path chosen by the IRA leadership.”

Mr Adams also noted how the then Ulster Unionist Party leader James Molyneaux said the cessation was the “most destabilising event since partition”.

Mr Adams concluded his recollection: “Twenty five years later this assertion remains an insightful reminder of the worm at the heart of political unionism.

“That is the fear of positive political change. It is self-evident now that if it had been left to the unionist leaders and the British government there would have not been a cessation. Thankfully, they did not have a vote at the IRA’s army council meeting which took that decision.”