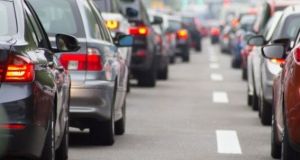 The Minister said Macroom had suffered commercially in that traffic congestion had dissuaded people living in the town’s natural hinterland from coming in there to shop and do business.

The Government is committed to delivering on a near €300 million piece of infrastructure on the N22 which will improve connectivity between Cork and Kerry and reduce travel times by around 15 minutes, Minister for Agriculture Michael Creed has pledged.

The Minister said he was confident that Cabinet would next month approve funding currently estimated by Transport Infrastructure Ireland (TII) at €280 million for the long awaited 22 kms Macroom bypass which will run from east of Macroom west to the Cork-Kerry county bounds.

“This ... has been a top priority for me since I went into Government three years ago and I am delighted to see we will be having a memo in Cabinet shortly and thereafter signing contracts - it’s long overdue,” he said.

“The cost benefit analysis is significant in the context of that investment and if you walk through the town of Macroom any day of the week and you see the congestion that’s there, you quickly realise how important a piece of infrastructure this bypass will be.”

Mr Creed said that Macroom had suffered traffic fatalities as a result of congestion in the town while it had also suffered commercially in that congestion had dissuaded people living in the town’s natural hinterland from coming in there to shop and do business.

“I don’t want to underestimate the time lag that will be there in terms of the time it will take to build it but it’s a really welcome development and one that is long overdue and it will be of benefit, not just to Macroom, but for all places from the county bounds to east of Macroom.”

Earlier this month, it emerged that TII plans for the €100 million plus upgrade of the Dunkettle Interchange linking the N8 Cork-Dublin Road and the N25 Cork Waterford road near the Jack Lynch Tunnel could be delayed by up to 12 months.

The news came after TII and contractor Sisk confirmed that they had failed to agree a price for the project and that, in line with the original contract, TII could go back to the market place and seek new tenders if TII and the contractor did not agree a price on the main construction works.

Asked if he had any fears that the Macroom bypass could suffer similar delays as a result of disagreements over price, Mr Creed dismissed such a scenario and said he was confident that Cabinet would approve funding next month and the project would proceed as planned.

A TII spokesman said tenders are currently with Cork County Council and it is expected they will be in a position to make a recommendation shortly on the preferred contractor, with the project then being sanctioned by the Department of Public Expenditure and Reform before going to Cabinet.

Once construction work actually commences on the project, it will take three and a half years to complete but it is expected the Macroom section, providing a diversion around the town, could be completed and opened earlier.