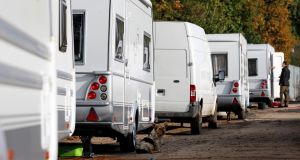 Minister of State for Housing Damien English has pledged to ensure that increased resources for Traveller accommodation are spent by local authorities.

Addressing the Irish Traveller Movement (ITM) in Galway, Mr English described a €55 million euro underspend by local authorities over the past ten years as “unsatisfactory” and said it was “unacceptable” that almost 4,500 Traveller families are living in overcrowded halting sites and housing units across the State.

He has also given an expert panel six months to come up with “three or four targeted solutions” as part of its review of the 1998 Traveller Accommodation Act and other related legislation.

Mr English said a “mindset change” was necessary on behalf of all stakeholders.

Five specific demands, including setting up a dedicated national Traveller accommodation agency which would bypass local authorities, were called for by the ITM at its conference.

The organisation is also seeking an amendment of Part 8 of the Planning Act, a repeal of criminal trespass legislation, and definition of home as a constitutional right to ameliorate the “crisis” situation which many Traveller families are in.

Welcoming Mr English as the first housing minister to address the movement’s conference, ITM chair Bernard Joyce reminded him that the number of Traveller families requiring accommodation had more than doubled since legislation was introduced in 1998 mandating local authorities to provide same.

Some 2,387 Traveller families are in the private rented sector, compared to 162 in 2002, the conference heard.

Mr English was critical of the underspend over the past 10 years, and reaffirmed the Government’s commitment to culturally appropriate accommodation for those Travellers seeking same.

He said that the “system” was at fault, rather than individuals, and pledged to implement recommendations which the expert group draws up.

Defending the delay in initiating the expert group, which he met on Tuesday, Mr English said that he had to check in with the National Traveller Accommodation Consultative Committee which had recommended the panel.

He hopes to receive a report within six months, though professing he would “love it if they would take three months” to report back.

Mr Joyce welcomed Mr English’s commitment to the issues, and said it was “symbolic” that he had both attended the conference and taken questions from members of the Travelling community.

“The situation young Travelling families are finding themselves in is unacceptable, with homelessness at 11 times the national average, and we have to be tough and so does the Minister,” he said.