O’Keeffe dedicates award to victims of abuse in Irish schools 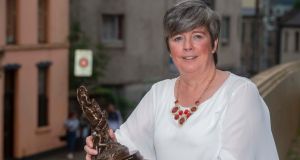 Campaigner Louise O’Keeffe told of how honoured and humbled she felt to become the first Cork person to receive the Spirit of Mother Jones Award, which she dedicated to all those who had been abused within the Irish education system.

Ms O’Keeffe was honoured by the Spirit of Mother Jones Festival in Cork for her campaigning for justice for those abused in schools in Ireland after she herself was abused by primary school principal Leo Hickey in Dunderrow National School in the 1970s.

She won her case when she took Ireland to the European Court of Human Rights over its failure to protect her in school and, accepting the Spirit of Mother Jones Award, she noted Mother Jones was also a campaigner for children in schools.

“Mother Jones, who was born in Cork, was known in the United States for her work as a trade unionist fighting for the rights of miners but she also campaigned for children and their right to go to school and be educated,” said Ms O’Keeffe.

“In a sense there’s a sort of connection in that what I and others here in Ireland have been doing is campaigning for the rights of children to be protected and safe in schools – something which all ordinary Irish people demand and expect.”

Accepting the Spirit of Mother Jones Award from Jim Nolan of the Cork Mother Jones Committee, Ms O’Keeffe said there were many others who were similarly fighting for justice for those abused in the Irish school system over the years.

“I would like to dedicate this award to them and to all the people I know who are out there who haven’t been able to speak out about what happened to them, so I see this award as inclusive of every child who was ever abused in our schools.

“I hope they realize with this award, ordinary people in Cork are acknowledging what they went through – they are listening to their silence and it’s a recognition of what they suffered and should not have suffered in Irish schools.”

Mr Nolan paid tribute to Ms O’Keeffe for her courage in fighting a 15-year-long battle to recognise the State’s failure to establish a proper child-protection framework in schools.

“Louise was often very alone with just her legal team in this fight against the Irish state, but she displayed a rare tenacity and total determination to fight and expose what had taken place to her and to many others,” he said.

Mr Nolan noted that Ms O’Keeffe had also shown great courage to persevere with her case as the State threatened similar litigants for their costs unless they dropped their cases against the state.

“Her extraordinary efforts have contributed to the findings of the recent assessor that the Government was fundamentally unfair to those abuse survivors and that compensation should be paid,” he said.

“For her bravery, her courage and her fighting qualities, and for her continued work to help other people who suffered abuse, we, in the Committee, are delighted to present the Spirit of Mother Jones award for 2019 to Louise O’Keeffe.

“And we are very proud to declare that Louise is the very first recipient from Cork of this great award, which is now in its seventh year and which acknowledges people who fight for justice and fair play.”