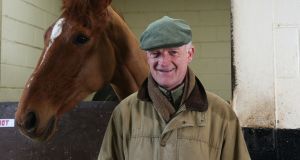 The annual Irish spring exodus gets under way on Monday with thousands of punters descending on the Cotswolds for the Cheltenham festival.

Ryanair has laid on 30 extra flights and expects to carry 20,000 Irish fans to the festival. Aer Lingus has some 1,400 extra seats . The hoards of Irish attending the festival appear to have recovered from the depths of the recession.

The huge Irish following will be matched by what some observers believe is the greatest equine team ever assembled by a single trainer for a racing festival.

Even Mullins is surprised by the size of the team he has assembled for national hunt’s premier festival. He is unbackable at 1/16, according to Paddy Power, to be the top trainer at the festival and Ruby Walsh is 1/3 to be the top jockey.

Four of his runners are favourites on the first day, including Douvan in the Arkle Chase and Annie Power in the Champion Hurdle whose fall at the last in 2015 denied Mullins an opening-day four-timer. Bookies are offering 26/1 on Mullins pulling off four winners on the first day, Tuesday.

Mullins’s wait for a Gold Cup also provides an intriguing side story. He has 41 victories at the festival but never a win in the biggest race. He has six chances of taking this year’s festival centrepiece which is headed by Vautour, Djakadam and Don Poli.

His father Paddy famously won the Gold Cup with Dawn Run in 1986. And the 30th anniversary of that victory will be replayed many a time this week.

In the English press, the story attracting special attention is the first Cheltenham appearance by the former two-time Olympic cycling champion Victoria Pendleton who rides in the final race of the festival, the St James’s Place Foxhunter Chase. Most pundits think it will be an achievement for her to post a clear round on Pacha Du Polder.

With the Dáil on an effective hiatus and it being St Patrick’s week, more than the usual share of Irish politicians are likely to be in Cheltenham for the festival.

The four-day event comes in the middle of probably the year’s busiest sporting week to date, starting with the RBS Six Nations win for Ireland against Italy on Saturday – a first win of the season in what has been a disappointing campaign.

Along with Cheltenham, the two other big sporting events of the week are the AIB All-Ireland club finals on St Patrick’s Day in Croke Park and Ireland’s final match of the RBS Six Nations on Saturday against Scotland in the Aviva Stadium.