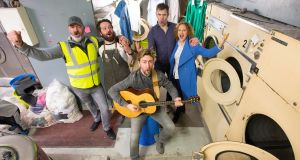 Many of them have day jobs such as being a chef, barber or boutique manager but Sligo musician Kieran Quinn has no qualms about bringing them to a Dublin stage which has been graced over the years by Bob Dylan, Planxty and Paul Simon, among many others.

In fact the pianist and composer is also bringing a local launderette manager, politician and journalist to Vicar Street this Thursday night as part of a 75-strong ensemble who have almost sold out the 1,000-seat venue. It feels like Quinn, a former Sligo GAA county player, is bringing half the town with him to the capital for the gig. A busload of fans will travel from Sligo to see the combination of professional and amateur local performers, aged 15-75, who are part of the 22nd Kieran Quinn Theme Night.

The man behind the theme nights, now an institution in Sligo, says the collaboration between locally-based professional musicians and others who “just happen to be amazing singers” or talented musicians is the key to the project’s popularity. “There’s a community feel to it.”

He started the theme nights in Sligo about seven years ago and regulars since then have included local professional musicians Steve Wickham, Cathy Jordan, Sandy Kelly, Seamie O’Dowd, Eddie Lee and James Nelson.

“Each time, I put together a band, string section, brass section, backing vocalists and a choir and then invite 25 or so singers from Sligo and the surrounding area to sing a song of their choice that fits the theme,” he explained.

Among those taking part in the Vicar Street show are Rory Maitland, a Collooney-based barber and his father Paul who worked until recently as a dog groomer, Dean Gurrie who helps run the family laundrette, Chris Baillie, a chef in the Stand bar in Strandhill, and Therese O’Loughlin manager of Choice boutique in Henry Lyons’ department store. Robert Cullen, former editor of the Sligo Weekender, and solicitor and county councillor Sinéad Maguire a Fine Gael general election candidate – who is married to Kieran Quinn – will be among the singers on stage.

Dean Gurrie, who plays acoustic guitar and has opened for many well-known acts including Sharon Shannon and Steve Wickham, says he gets a lump in his throat thinking about Thursday night and all the local people who will be there. “This is a crazy little town. I have friends who visit Sligo and they cannot believe all the music here.”

Paul Maitland will be singing Bohemian Rhapsody with his son Rory on the night. “We did it once before on a stage in the Stephen Street carpark in Sligo town for a festival and I thought my heart would burst in my chest,” said the Glaswegian. “I have been singing in musical theatre all my life and I love it. Kieran gives everybody a chance. You hear ads on the radio for all these big names playing in Vicar Street and I can’t believe we will be there.”

His son, Rory, knows they are doing a big number. “Only Freddie can sing Freddie but we did it in front of 3,000 people in Sligo.”

Dubliner Therese O’Loughlin met her husband Eddie Lee when he was playing with Stockton’s Wing in Bad Bobs and they moved to Sligo in 1991. “I have sang in choirs all my life. I love doing this. There is great camaraderie among the whole group. Nobody is allowed to be a diva,” she said.

Sinead Maguire says that despite her family connections she has a “minor” role in the choir but being part of the project is a way of taking a break from law and politics. “You cannot sing and think about anything else. You are there in the moment and you feel so much better afterwards”.

Kieran Quinn has his fingers crossed that the Dublin audience will like what they do.