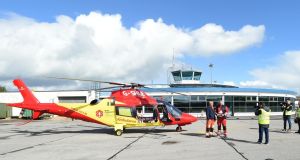 Irish Community Rapid Response will honour its commitment to provide cover for the Irish Air Corps service operating from Athlone despite funding issues.

ICRR Air Ambulance Operations Manager, Ruth Bruton confirmed Wednesday was the first day the Helicopter Medical Emergency Service (HEMS) had not operated since its launch last July and that it would also not fly on Friday.

“We’re not flying our lifesaving service today or Friday and unfortunately there will be more dates in February when we will curtail our service to five days a week in order to save funds to keep us flying until the end of February.”

But she said the ICRR Air Ambulance would honour its commitment to provide HEMS cover for the Air Corps Emergency Aeromedical Service, operating from Athlone for a total of eight days between now and the end of February.

Ms Bruton said that the ICRR Air Ambulance would send its relief helicopter and a secondary crew to Athlone to cover this Tuesday, Wednesday, Thursday and Friday as well as four days in February in line with its commitment.

In 2018, the Air Corps EAS in Athlone was involved in 159 responses to serious car crashes, 146 other medical emergencies and 15 urgent transports of children to hospital.

But last November in a statement to RTÉ News, the Department of Defence confirmed the EAS service will not operate for 16 days between late November and February due to staffing and training issues.

Ms Bruton confirmed that ICRR Air Ambulance has to this year to date received approximately €70,000 of the €550,000 it needs to keep operating until the end of February, leaving the service facing a shortfall of €480,000.

She explained that the reason for the shortfall was that the service has exceeded its projected number of missions which it had originally estimated would total some 350 operations per year.

However in just six months since the service went live on July 31st 2019, the service has flown a total of 285 missions to date with each mission costing on average €3,500, said Ms Bruton.

The service is provided in conjunction with the National Ambulance Service which covers the cost of medical personnel, medical equipment and medical consumables with the ICRR covering all flying related costs.

This includes the cost of the helicopter, pilots, fuel, air base facilities, insurance and other operational needs and was originally projected to amount to €2.5 million per annum for the service which operates from Rathcoole in North Cork

Ms Bruton said that the ICRR was confident that if it received support from the government for a further 18 months, it would be sufficient as the charity would hope to have raised its profile within that time to become self-sufficient.

She pointed to the success of a similar community funded HEMS in Northern Ireland where following an initial state support of over £4 million, it was now self sufficient with funding from the community paying for the service.

“They did get an amount of money to cover the first year or two of operations which allow them to focus on their funding with a tangible live service and between July 2017 and December 2019, they flew 1,254 missions,” she said.

She also pointed to the situation in the UK where similar services such as Wales Air Ambulance are exempted from paying VAT unlike here in the Republic where ICRR pays VAT at 23per cent and 13.5per cent VAT on fuel.

“The charitably funded model is extremely successful in the UK and in Northern Ireland which is culturally very similar to ourselves here so it is a proven model and is proven to have an impact and save many, many lives.”