Broadband plan: First 35 areas to get high-speed service are revealed

Phase one of the national plan is focused on locations in east, midlands and around cities 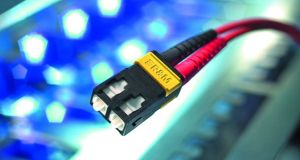 The first four areas to be serviced will be the areas around the cities of Limerick, Kilkenny and Galway, and around Carrigaline, south of Cork city.

The first 35 areas to be served with high-speed broadband under the National Broadband Plan have been revealed at a private industry meeting.

The locations for the network points, which will be built between now and the end of 2021, are spread across the country, but more are located in the east and the midlands. The first four areas to be connected, however, include areas around Limerick and Galway.

The first four areas to be serviced by high-speed broadband will be the areas around the cities of Limerick, Kilkenny and Galway, and the area around Carrigaline, south of Cork city.

A presentation given to retail service providers who will use the network shows that the Galway and Carrigaline points will be the first to be designed and built, followed by Limerick and Kilkenny. All four will be completed by the end of 2021.

National Broadband Ireland (NBI), the company formed to implement the rural plan, aims to construct the next 31 network points by the end of 2021.

In Clare, a station will be built at Kilkishen, east of Ennis. There will be two in Cork, at Carrigaline and Midleton. One will be built in Cavan, near Cavan town, and in Carlow near Carlow town. A single station is also planned for Donegal, near Letterkenny, and in Skerries in Dublin. Three will be built in Galway, in the city, Gort and Ballinasloe. A single point will be built in Kilkenny and Longford, near each county town.

Two are destined for Louth, at Dundalk and Drogheda; one in Limerick city; one in Leitrim at Carrick-on-Shannon; and one in Portlaoise. One will be built in Dunboyne/Clonee in Meath and one will be delivered in Monaghan town.

Two are planned for Mayo at Ballina and Castlebar, one in Roscommon in Roscommon town and a single station in Sligo town. Three will be constructed in Tipperary, at Clonmel, Roscrea and Tipperary town; two in Waterford; two in Westmeath at Athlone and Mullingar; two in Wicklow at Blessington and Kilcoole; and a final one in Wexford town.