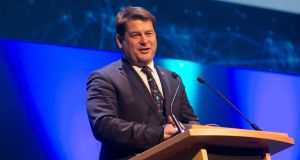 Dara Murphy registered his presence in Leinster House on 42 of the 104 sitting days in 2018. Photograph: Gareth Chaney/Collins

Interesting figure from the Dara Murphy fob-a-job abomination – while the bulk of his appearances in Leinster House occurred when the Dáil wasn’t in session, he registered his presence on 42 of the 104 sitting days in 2018. Whether he just fobbed in and flew off or clocked on and stuck around is not clear, but the record shows that Air Miles Murphy definitely planted his piggies on the carpet in Leinster House on the days in question.

During that year, Dara was hard at it as director of elections for the European Peoples’ Party, largely based in Brussels. He did a great job, in fairness.

Manfred Weber, the German politician for whom he worked tirelessly as the group’s preferred candidate for president of the EU, didn’t get the top job. And the EPP lost more than three dozen seats.

Dara’s success rate in the overall election campaign may have been hampered by a pressing need to meet another important target – 120 electronic hits registered somewhere on the Oireachtas campus to reach the minimum threshold of days required to qualify for full expenses and allowances.

In a heroic effort, Manfred’s man did not fall short in his Irish campaign – 120 clean strikes on 120 days.

But had he been able to spend more time in Brussels instead of having to front up for the appearance fees in Dublin, the election results for the EPP might have been better.

The group lost 42 seats, the same amount of fob-a-job days their director of elections sacrificed on 42 sitting days in the Dáil. A sad symmetry.

Congratulations to Kevin Doyle, the Indo’s much-respected group political editor who is relinquishing his seat on the Oireachtas Press Gallery and returning to the mothership as INM’s group news editor.

In recent weeks Offaly man Kevin hasn’t been as visible as he usually is around Leinster House – not as much to do with the big promotion in Talbot Street as it is to do with an unfortunate accident at the Sinn Féin ardfheis.

The Indo had a great scoop this year with the Maria Bailey Swing-gate story. This rattling yarn about the Fine Gael TD who sued for damages after she fell off a swing in a Dublin hotel bar was one of the reasons Doyle was named Political Journalist of the Year. The story also brought the issue of insurance and compensation claims to the fore in public and political discussion.

Two days after he collected his award, Doyle was at the centre of his own pub slip-and-fall drama.

The incident happened after Mary Lou McDonald’s keynote address to the Sinn Fein ardfheis in Derry’s Millennium Forum. The party press office invited journalists to join them for drinks in a nearby traditional Irish music bar after the main event of the night.

When the hacks finished work they headed over to Peadar O’Donnell’s hostelry on Waterloo Street. It was heaving with Shinners unwinding after the conference weekend. The pub is owned by Willie McGuinness, brother of the late Sinn Fein leader and IRA activist, Martin McGuinness.

Not long after they settled themselves in, the Indo journalist paid a visit to the gents where his feet went from under him on the wet floor. He landed on his rear end with an unmerciful wallop, coming down with such force that his arm popped out of its socket. A customer came to his aid and helped him stand up.

Mortified, and in considerable pain, he returned to the table with his arm limply dangling by his side. Sinn Féin’s spokeswoman on health, Louise O’Reilly, rushed over to help. Doyle was subsequently conveyed by ambulance to Altnagelvin hospital.

Right-hander Doyle was out of action for some time. He eventually arrived back in Leinster House with his heavily strapped arm in a sling and some hair-raising x-ray pictures of his shoulder.

“Did you fall off a swing too?” “How many drinks were you holding?” “Need the number of a good lawyer?” “Ask Maria.” “Try Alan Farrell. ” “When are you going on Sean O’Rourke’s show?” “Betcha we won’t be reading about this in the Sindo!”

The slagging has been relentless and merciless.

He’ll be glad to get shut of us.

‘Gerry get your hair cut’

Gerry Adams is in entertaining form these days on his Leargas blog. The former Sinn Féin leader has been writing about his time on the campaign trail in Dublin Mid-West byelection. No wonder his high-spirited dispatch is such fun, the party’s candidate Mark Ward pulled off a memorable victory for the party.

Here’s Gerry on his fondness for the tried and tested old-megaphone method of getting the message across: “I have always found mobile loud-hailing a very effective way of getting the Sinn Féin vote out. After the weeks of canvassing it is the best way for encouraging the maximum amount of people to get out and vote. Of course it only works where you know your vote. In Dublin that’s most likely to be working class estates. Like the ones we were in Dublin Mid West in a very focused way during this campaign.

“It’s also good craic. Give me a microphone and a car and I will happily spend hours urging the voters to exercise their franchise. It’s funny watching how people respond to a disembodied voice booming at them from they know what where.

“How y’doing missus? Lovely day isn’t it. Voted yet?”

When they realise it’s me it’s very entertaining.”

It probably is, although one wonders if “entertaining” would be the right word to describe the reaction of people back in the day upon hearing the disembodied voice of Gerry Adams booming at them and then realising he is trailing them in a car...

Gerry also shed some light on one of the other big talking points in Leinster House this week (apart from Dara Murphy’s indefensible fob-a-job efforts and the Taoiseach’s shameless attempts to shunt them off into an irrelevant siding).

It’s his hair. Gerry seems to be going for a Jeff Bridges silver fox vibe but he’s rocking the lovechild of Bob Geldof and Ann Widdecombe look.

Here he is again:

“My hair also got a lot of attention.

Or ‘I didn’t know Billy Connolly was a Shinner’

‘Gerry get your hair cut’!

‘Gerry your hair is lovely’.

Let me clarify this hair thing. I have a bet with Martin Ferris and Caoimhghín Ó Caoláin that we will let our hair grow until An Taoiseach calls a general election . So far I am winning that bet.”

Winning it by a mile. Particularly as Caoimhghín is bald and the neatly coiffed Martin substantially reduced his hair growth last week when he shaved off his beard for the first time in 44 years to raise funds for the Kerry Cancer Support Group.

There is no truth in the rumour that Senator Lynn “Ronaldo” Ruane is on the FAI’s hit list of favoured candidates to succeed John Delaney and bring some order to the troubled Abbotstown association. A midfield general on the pitch and can-do dynamo in the political arena, Lynn was behind a special football fixture this week between a Leinster House eleven and a selection of galacticos from the Beacon of Light Counselling Centre in Tallaght.

The centre’s Breakthrough Programme was started in 2016 to help young men in west Dublin access counselling for specific issues such as anger management, depression, suicide, addiction and anti-social behaviour. The 10-week programme, aimed at the 18-30 age group, offers mental health and physical support. One of its main sponsors is Shamrock Rovers FC.

Former Ireland international Keith Fahey, who is now part of the Rovers’ coaching team, togged out for the home team while football pro turned pundit Richie Sadlier mentored from the sidelines.

The Oireachas squad was managed by Senator Frances Black, who gave a rousing half-time team talk. Players included Ruane and the new Green Party senator, Pippa Hackett. Gino Kenny was the only TD to line out while senators Frankie Feighan, Neale Richmond, Fintan Warfield and Aodhan Ó Riordain laced up their boots for the occasion.

Members of the press gallery also showed willing. Pat Leahy and Harry McGee of this parish were so crocked they could hardly walk on Thursday morning. The final result was a hard fought 1-1 draw with silky Leinster House usher Ray Cummins outfoxing the defence to slot home a memorable goal for the visitors.

The absolute highlight of the night was the appearance by Minister for Sport, Shane Ross, who togged out gamely and was duly rewarded when the Tallaght Echo took loads of photographs of him.

He faffed up and down the sidelines for a bit and then roared on to the pitch as a 10-minute supersub before he was taken off. As he was walking to the dugout, McGee spectacularly miskicked and the ball hit the oblivious Minister on the back of the head.

“It was Shane’s only touch of the day, to be honest,” says Senator Ruane.

The Department of Foreign Affairs Wellbeing at Work programme is the gift that keeps on giving.

We recently brought news of the DFA’s bring a plant to work week. The initiative, part of “Quarter 4 of the Wellbeing Framework” focused on the huge benefits of plants in the workplace and photographs of plants were sought from DFA missions “across our global network”. People could name their plant and “give a short summary about it” if they wished.

The next phase in the wellbeing offensive took place recently and it sounds even more exciting than the plant extravaganza. Staff in foreign affairs were invited to a “decluttering talk” given by…wait for it… “a sustainable decluttering consultant”.

“The talk will be interactive and focus on a holistic approach to decluttering” and the sustainable decluttering consultant will “speak on consumer culture and mindful shopping” the jaded civil servants were informed. “Her experience is that getting to the root of the problem is more important than pretty organisation displays.”

In Iveagh House and in the embassies and consular missions abroad, we understand the civil servants are absolutely thrilled by all this concern about their pay and conditions, sorry, wellbeing.

A sustainable decluttering consultant, though. Who wouldn’t want to be one?

When you think about it, we will all have the opportunity to become sustainable decluttering consultants next year when the general election comes around.

Instead of going out to vote, or exercise your franchise, tell people you are off on a mission to sustainably declutter Dáil Eireann by helping to remove some of the more useless ornaments clogging up the benches. But in a mindful and holistic way.